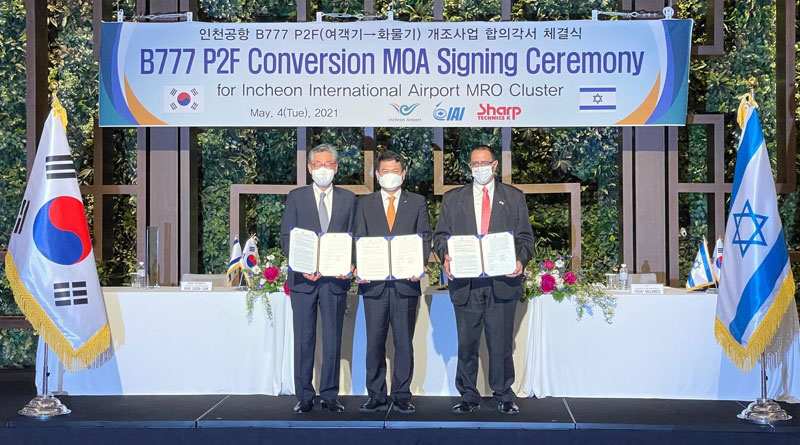 On 4 May, Israel Aerospace Industries (IAI) signed a Memorandum of Agreement (MoA), with the Incheon International Airport and Sharp Technics, to establish a Passenger 2 Cargo (P2F) conversion site in South Korea. The facility will specialize in converting Boeing 777-ERSF (“Big Twin”) from passenger to freighter. Within the framework of the agreement, IAI will convert six B777-300ER and B777-200LR per year, starting in 2024. Establishing more P2F aircraft conversion facilities around the world is necessary in order to meet the expected rise in demand for wide-body freighter aircraft with capacity for long flights.

A press statement from IAI stated that the IAI’s Aviation Group was working round the clock to prototype the B777 P2F conversion and is expected to conclude the licensing process by 2023. The B777 model represents the next generation of freighter aircraft, and will join the family of IAI’s conversions, including– B747, B767, B737NG, and the B737 classic.”

EVP and GM of the Aviation Group, IAI , Yossi Melamed said, “IAI’s Aviation Group is a world class leader in converting wide-body passenger aircraft to freighter, and manages conversion lines in Israel and around the world. Signing today with Incheon International Airport and Sharp is directly connected to IAI’s close cooperation with the South Korean aviation industry, and highlights IAI’s trust and respect in South Korea’s ability to establish a conversion line to meet demand, along with the necessary trained manpower. Over the past few years IAI has transferred production of business jet wings, main frame, and parts of the tail to Korean companies. I look forward to expanding our strategic cooperation activities with South Korean companies and government authorities.”

President Kim Kyung-wook of Incheon International Airport Corporation said, “By attracting the first overseas production base of IAI’s large-sized cargo aircraft to the Incheon Airport MRO cluster, which exclusively possesses the technology for retrofitting Boeing’s large passenger aircraft, we will grow together and contribute greatly to the development of the national and regional economy. Based on the world-class air transportation infrastructure of Incheon International Airport, we will continue to attract world-class aviation MRO companies to Incheon Airport. We plan to contribute to strengthening the competitiveness of the Korean aviation industry.”

CEO & President Soon-Suk Paik of Sharp Technics K said, “The conversion of cargo aircraft requires tremendous investment costs, advanced technology, international certifications, and skilled aviation maintenance personnel, which reflect the high barriers to entry in the MRO industry. Although STK is a private company, as a member of the aviation industry, we will do our best in the private sector with the vision of contributing to the development and national interests of the Korean aviation industry.”