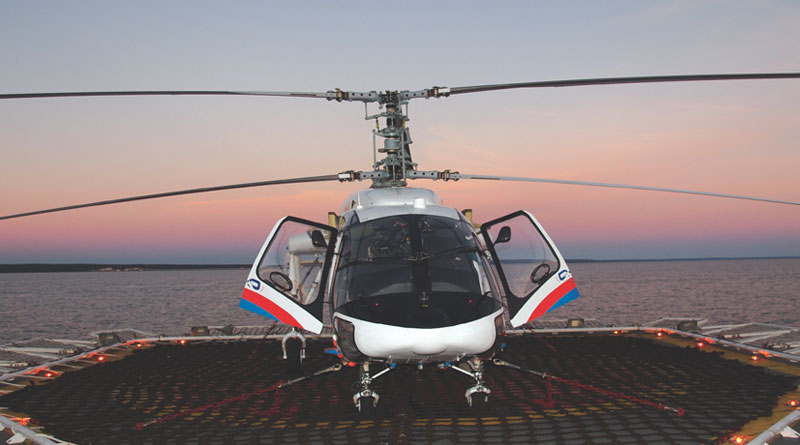 Chennai: Russian Helicopters will hold negotiations on after-sales service of Russian helicopters used in India during DefExpo 2018. In a teleconference during the Show, CEO Russian Helicopters, Andrey Boginsky said, “We plan to concentrate on after-sales service, repair and modernisation of equipment that has already been delivered to India. Moreover, we will discuss implementation of the Russian-Indian joint venture for assembling Ka-226T helicopters, which was incorporated last May. A presentation of the Ka-226T naval helicopter which, as we believe, could be assembled under the joint venture will be held for our partners.”

According to Russian Helicopters. Ka-226T is a light multi-mission helicopter with a coaxial twin-rotor system with the maximum take-off weight of up to 3.6 tonne. It is able to transport up to one tonne of payload. The main distinctive feature of the helicopter is its modular design –a transport cabin that can carry up to six people or modules with special equipment can be easily installed on the Ka-226T. The helicopter is equipped with a modern complex electronic hardware and a special crash-resistant fuel system. The maximal climb rate of 10m/sec, low noise level and manoeuvre capability allow Ka-226T to be used in different climatic and terrain conditions, including over cities with restrained urban conditions.

A Ka-226T model is on display at the Russian Helicopter stand, in addition to a model of the offshore version of Mi-171A2. In November 2017, Russian Helicopters entered a contract with India’s Vectra Group for delivery of a Mi-171A2 multi-mission helicopter. The agreement also stipulates an option to purchase another helicopter of this type.

There are over 80 modifications in the Mi-171A2 design as compared to the baseline model, according to the company. The helicopter is equipped with the VK-2500PS-03 engines (a civilian version of engines installed on Mi-28 combat helicopters) with the digital control system. A new rotor system is one of the main distinguishing features of the Mi-171A2 helicopter compared to Mi-8/17 helicopters. The helicopter has a more effective X-type antitorque rotor and a new main rotor with all-composite blades with the improved airframe configuration. Thus, thanks to aerodynamics alone, the thrust of the Mi-171A2 main rotor increased by more than 700 kg, which had a positive impact on the helicopter’s performance.

The company also announced that Russian Helicopters has developed a training programme for the Indian pilots and technical specialists within the framework of Russian and Indian project for the supply and localisation of Ka-226T helicopter production in India.

In yet another announcement, it said the Indian side has approved the technical configuration of the light utility Ka-226T helicopter developed by Russian Helicopters to be assembled by Joint Venture Indo-Russian Helicopters Limited in India.