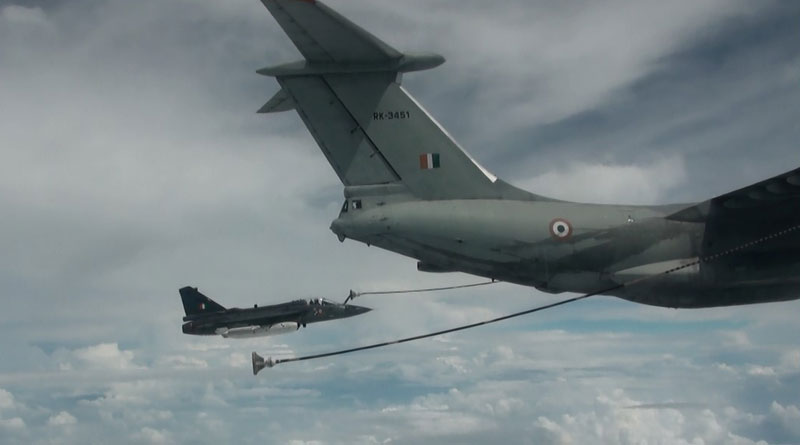 India’s Light Combat Aircraft (Tejas) has achieved another feather in its cap. A Limited Series Production aircraft (LSP8) successfully managed to refuel itself from an IL 78 mid-air refuelling tanker, at an altitude of 20,000 feet.

The aircraft was flying at a speed of 270 knots when it conducted a Wet (actual) engagement with an Il-78 Air-to-Air refuelling aircraft. The Tejas replenished its internal and drop tanks as well with 1900 kgs of fuel.

Piloted by Wg Cdr Siddarth Singh of NFTC, this significant milestone was achieved on Monday at 0930 hrs with designers from HAL and ADA closely monitoring the system parameters from the ground station at Gwalior.

It must be noted that successful dry docking of aerial refuelling probe with the mother tanker was carried out on September 4th and 6th, 2018.


The performance of aircraft systems (mainly Fuel & Flight controls systems) during the trial performed as per design requirements and matched the results of extensive ground tests of air-to-air refuelling system.

Mr R Madhavan, CMD, HAL, said: “With this, India has now joined an elite group of countries who have developed their own Air-to-Air (AAR) system for military class of aircraft.”