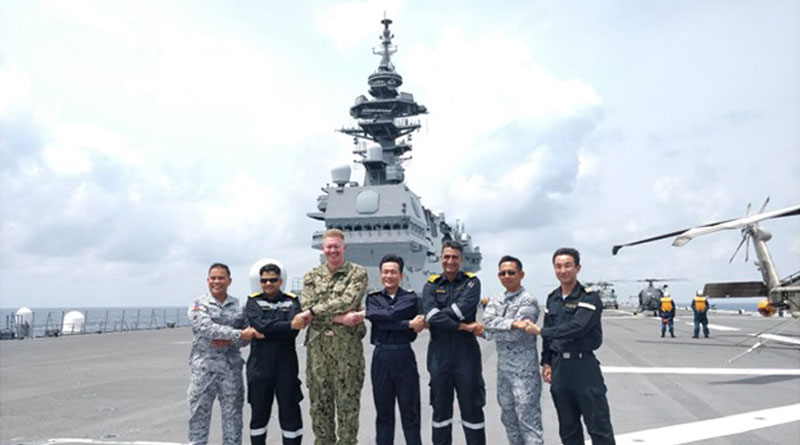 The Indian Navy ships, Kolkata and Shakti, carried out group sail with the naval ships of Japan, Philippines and the United States of America in the South China Sea from 3 May to 9 May 2019. The six-day long group sail witnessed the participation of six combatants from the four participating countries and included the Guided Missile Destroyer INS Kolkata and Fleet Support Ship INS Shakti of India, Helicopter Carrier JMSDF Izumo and Guided Missile Destroyer JMSDF Murasame of Japan; Frigate BRP Andres Bonifacio of Philippines and Arleigh Burke Class Destroyer USS Williams P Lawrence of USA. The Group Sail was aimed to deepen the existing partnership and foster mutual understanding among participating navies.


The Indian Navy ships are on return passage from their successful deployment to South and East China Seas as part of the annual Eastern Fleet Overseas Deployment during which they visited Cam Ranh Bay, Vietnam, Qingdao, China and Busan, South Korea. Whilst at Qingdao, both the ships had participated in the International Fleet Review (IFR) as part of the 70th Anniversary Celebration of PLA (Navy). During the ships’ stay in Busan, the IN ships took part in the opening ceremony of Maritime Security (MS) Field Training Exercise (FTX) under the aegis of ADMM-PLUS.

On departing Busan, both the ships participated in ADMM-PLUS MS FTX Phase I exercises from 1 May to 3 May 2019 off South Korea with navies of Brunei, China, Malaysia, Philippines, Singapore, South Korea and the USA. Group Sail progressed from 3 May to 9 May. The phase II of ADMM-PLUS MS FTX is scheduled from 9 May to 12 May 2019 in the South China Sea. On completion of phase II, all participating ships, including IN ships Kolkata and Shakti, are scheduled to attend the closing ceremony of ADMM-PLUS MS and participate in the International Maritime Defence Expo (IMDEX) 2019 in Singapore.