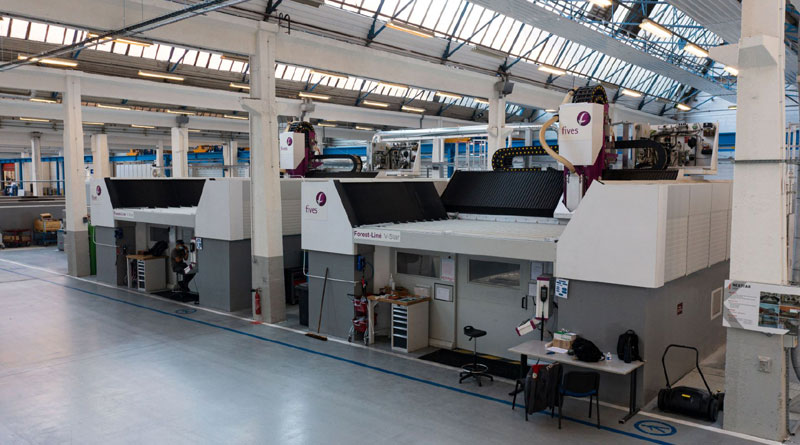 On August 25, Nexter’s Director of Operations, Sylvain Rousseau inaugurated the new high-speed machining (HSM) area in Roanne in front of an audience of about 100 people, including representatives of FIVES Machining, CHAZELLE and MECNOLAV. The site now houses new state-of-the-art tooling that will increase its production capacity to meet the Army’s need to renew its vehicles and machines.

The HSM area uses a machining technique that achieves cutting speeds several times higher than those of conventional machining. This speed induces physical phenomena that spare the tool and the machined part. This results in better industrial yields.

Till date, two machines have been installed and are operating. Eventually, two more will be installed for a total of four. The HSM area will be able to cut and drill the thick sheet metal plates required for the production of aluminium hulls, which are used to protect the soldiers from damage. The capacity of this new HSM island will eventually allow the production of the parts required for the 450 or so vehicles to be delivered per year from 2025 onwards. This high-speed vehicle island represents nearly one third of the 60 million euros invested in the Roanne site modernization project called “Nextfab”.

Nextfab’s objective is to triple its annual vehicle production capacity by 2025. To achieve this, the site is to be extended by 12,000 m2 and 70 percent of the existing surface is to be redesigned. The project will provide new capacity for production, testing facilities, logistical support, customer support activities and staff training.

The Roanne site plays a central role in the renewal of the French Army’s capabilities under the SCORPION program. This ambitious and innovative program involves replacing the armored vehicles of the middle segment with new equipment such as the SERVAL and GRIFFON multi-role armoured vehicles, and the JAGUAR armoured reconnaissance and combat vehicle. This program also includes, for the heavy segment, the modernization of the LECLERC tanks. All of these vehicles will benefit from the same equipment standard in order to make them interoperable and ensure their networking.

Nexter’s Director of Operations, Sylvain Rousseau sees “the commissioning of this high-speed machining island as a major step in the Roanne site’s capacity increase. Thus, Nexter is developing in line with our ambition to triple vehicle production by 2025. Thanks to the know-how provided by FIVES Machining, Nexter is achieving unprecedented industrial and technological capabilities.”