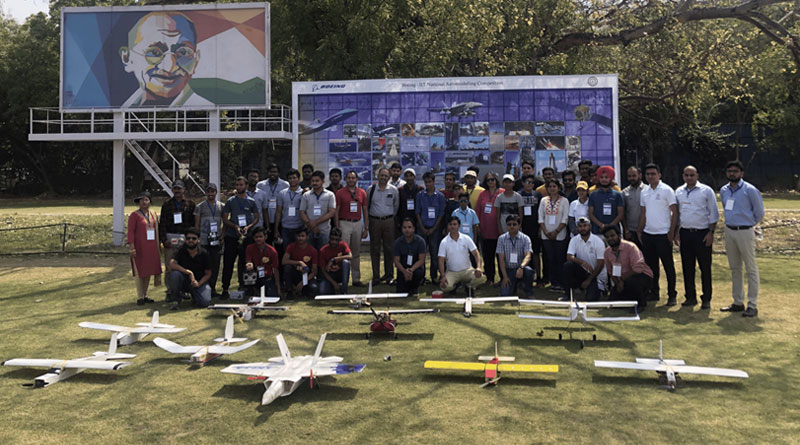 Boeing and Indian Institute of Technology have announced the winners of sixth annual Boeing-IIT National Aeromodelling Competition, one of the nation’s top aeromodelling programmes.

Boeing and the Indian Institute of Technology (IIT) announced the winners of the sixth annual Boeing-IIT National Aeromodelling Competition. The competition is one of India’s largest and most popular aeromodelling programs. This year’s competition saw 1,094 students from over 250 institutions across India take part in the competition. The tussle also saw a 30% increase in the number of girls participating in the zonal rounds.

Once the preliminary rounds were over, 34 finalists from 12 teams were selected to the final round held at the IIT Delhi Hockey grounds. Disha Bawale, Indraneel Mane Deshmukh, Apoorv Mathakari, Pruthwiraj Kothavale from MIT College of Engineering were declared winners of the competition.


“The Boeing-IIT National Aeromodelling Competition is an excellent platform that gives young aviation enthusiasts in India a chance to hone their skills,” said Salil Gupte, president, Boeing India. “I want to thank all the students for their participation. The prospect of these students in India creating the next big disruption in aerospace excites us. We are proud to be part of an ecosystem that inspires young minds to innovate,” added Gupte.

The zonal level rounds of the competition were held at IIT Kanpur, IIT Bombay, IIT Kharagpur and IIT Madras. The top three teams from each zone came to IIT Delhi to participate in the finals. In the run-up to the competition, Boeing conducted aeromodelling workshops across the IIT campuses to train students on designing and building radio-controlled airplanes.

Through initiatives such as the Boeing-IIT National Aeromodelling Competition, the Boeing HorizonX India Innovation Challenge and the Accelerated Aircraft Maintenance Engineers (AME) Apprenticeship program, Boeing is actively developing an ecosystem that encourages innovation and skill development for aerospace in India.

Boeing’s partnerships with academia and the industry have resulted in the establishment of two research centres —Aerospace Network Research Consortium (ANRC) at Bangalore and National Centre for Aerospace Innovation and Research (NCAIR) with IIT Bombay.

Boeing is an aerospace company and leading manufacturer of commercial jetliners, defense, space and security systems, and service provider of aftermarket support.