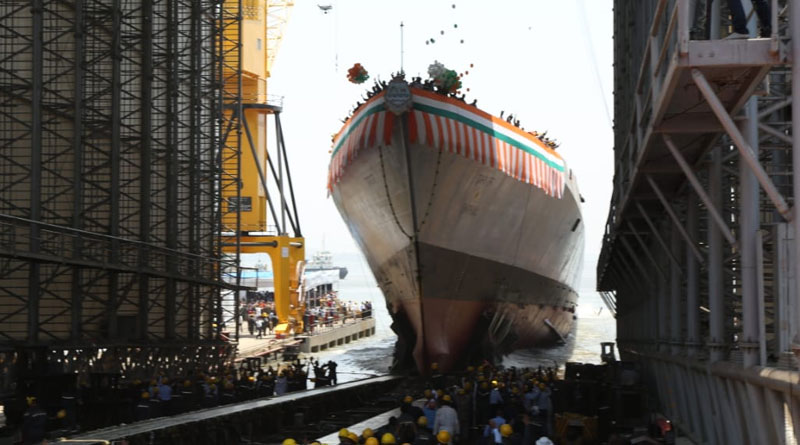 The third ship of Indian Navy’s ambitious Project 15B, Guided Missile Destroyer Imphal, was officially launched on April 20 by the Chief of Naval Staff Admiral Sunil Lanba at Mazagon Dock Shipbuilders Limited (MDL), Mumbai. The momentous launch marks a stepping stone in the growth of indigenous warship design and construction.

Sporting a launch weight of 3,037 tonnes, the vessel made first contact with the seas at 1220 hours with full fanfare during the launch ceremony.

According to a statement released by the Indian Navy, the Project 15B ships feature cutting edge advanced technology and are comparable to the best ships of similar class anywhere in the world. These ships have been designed indigenously by the Indian Navy’s Directorate of Naval Design, New Delhi.


The P15B destroyers incorporate new design concepts for improved survivability, sea keeping, stealth and manoeuvrability. Enhanced stealth features have been achieved through shaping of hull and use of radar transparent deck fittings which make these ships difficult to detect. P15B ships will be equipped to carry and operate two multiple role helicopters. Each ship spans 163 metres in length and 17.4 metres at beam and displaces 7,300 tonnes. These ships will be propelled by four gas turbines to achieve speed in excess of 30 knots

These ships are packed with an array of state-of-the-art weapons and sensors, including multi-functional surveillance radars and vertically launched missile system for long distance engagement of shore, sea-based and air targets. With significant indigenous content, these ships are a true hallmark of self-reliance attained by our country in warship design and shipbuilding, and a shining example of the ‘Make in India’ philosophy.

Speaking on the occasion, the Chief Guest, Admiral Sunil Lanba commended the synergic partnership of MDL, Indian Navy, DRDO, OFB, BEL, other public sector enterprises and the private industry in ensuring that force levels are made available to meet India’s National strategic maritime objectives. He also congratulated all agencies associated with the milestone.