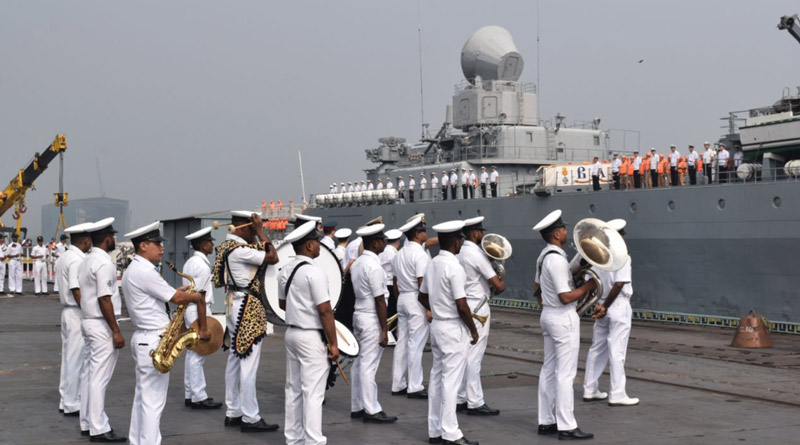 The Navies and Air Forces of India and Russia are participating in major bilateral exercises in India, ahead of the Indian-Russian intergovernmental Commission on Military-Technical Cooperation scheduled later in the week.

The first, Exercise INDRA Navy, a bilateral maritime exercise, will be held from December 9 to December 16. The 10th iteration of this bilateral exercise will be conducted at/off Visakhapatnam. Ex INDRA Navy 2018 will be conducted in two phases. The harbour phase will be held at Visakhapatnam from December 9 to 12 and will encompass planning conferences, professional interactions, cultural visits, sports fixtures and formal calls between flag officers and senior officers of participating navies. Russian Federation Navy (RuFN) Ships Varyag, Admiral Panteleyev and Boris Butoma recently arrived at Visakhapatnam for the harbour phase of the exercise. The sea phase from December 13 to 16 will be conducted in Bay of Bengal. The thrust of exercises at sea will be on Anti-Submarine Warfare (ASW), Air Defence drills, Surface Firings, Visit Board Search and Seizure (VBSS) operations and tactical procedures. The Indian Navy ships participating in the exercise would be under the command of Flag Officer Commanding, Eastern Fleet Command, Rear Admiral Dinesh K Tripathi. The Ships of the Russian Federation Navy will be under the Command of Chief of Headquarters, Submarine Forces, Rear Admiral Mikhailov Edward Evgenievich and ships from the Pacific Fleet, based at Vladivostok.  During exercise, the Indian Navy will be represented by INS Ranvir, a guided missile destroyer, INS Satpura, an indigenous frigate, INS Kadmatt, an indigenous anti-submarine warfare (ASW) corvette, IN Ships Kuthar and Khanjar both indigenous missile corvettes and INS Jyoti, a fleet tanker. In addition, one Sindhughosh class submarine, Dornier maritime patrol aircraft, Hawk fighter aircraft and other integral rotary wing helicopters will be taking part in the exercise. This exercise aims to increase inter-operational amongst the two navies, develop common understanding and procedures for maritime security operations. Initiated in 2003, INDRA Navy exercise has matured over the years with increase in scope, complexity and level of participation.


The second, Exercise AVIAINDRA 2018, the second in the series of bilateral service specific exercises with Russia will commence on December 10 at Air Force Station Jodhpur AVIAINDRA-2018 is a bilateral aerial exercise between the Indian Air Force and the Russian Federation Air Force. The exercise is planned in two phases. What makes this exercise unique is that the foreign contingent will be participating without its air assets and thus Russian pilots participating in this exercise will be flying in planes that are common to both the Air Forces. In Russia, the IAF pilots flew alongside their Russian counterparts in RFSAF aircraft at Lipetsk from September 17 to September 28, 2018 during the first phase of this exercise. During the first phase, the Indian contingent – comprised of thirty officers from different branches namely flying, admin and medical branch – participated with Su30, Mig-29, Su-25, Mi-8 and An-26. The exercise is aimed at enhancing the co-operation and understanding between the two Air Forces. The contingents would interact and discuss their operational concepts as well while also playing out scenarios and maneuvers in the air also. Moreover, there would be friendly sports activities as well to enhance camaraderie between the two contingents.