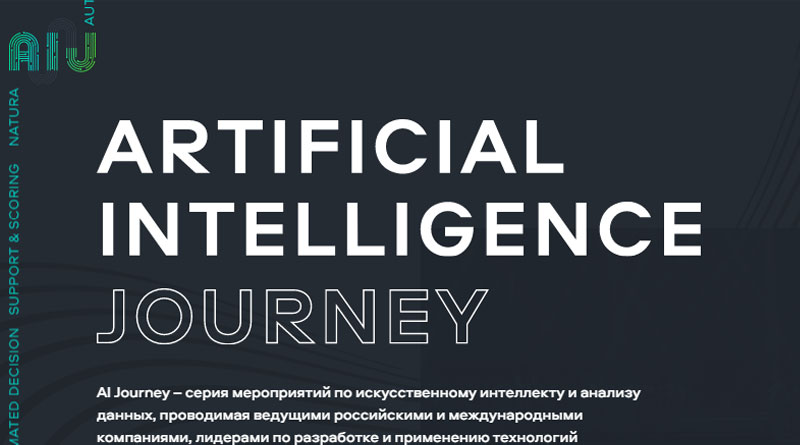 Artificial Intelligence Journey, an international conference dedicated to artificial intelligence and data science, has emerged as one of the biggest AI/DS events worldwide. Organized by Sber with title partners like Intel, Huawei, MTS, SAS, Rosatom, and RDIF, the event was held online between December 3 and 5.

Opened by Herman Gref, CEO and Chairman of Sberbank’s Executive Board, the conference attracted 29,000 people from 101 countries, including about 7,400 schoolchildren. During AI Journey, over 200 speakers – scientists, researchers, and top managers – from 10 countries delivered presentations, which, if combined, lasted nearly 100 academic hours. The event was watched by over 21 million viewers.

The main discussion, Artificial Intelligence — the Prime Technology of 21st Century, was moderated by Herman Gref and welcomed Russian President Vladimir Putin and the President of Kazakhstan Kassym-Jomart Kemeluly Tokayev. Vladimir Putin stated that artificial intelligence is undoubtedly the foundation of the next breakthrough for the entire humanity and its evolution, and self-learning AGI can deliver unbelievable discoveries and technological breakthroughs. Presentations were also made by Deputy Prime Minister of Russia Dmitry Chernyshenko and Maxim Oreshkin, an Adviser to the President.

At the conference, Sber announced several innovative AI offerings and strategic solutions. For instance, with assistance from the leading domestic and world researchers, in January 2021 Moscow is scheduled to open Russia’s first Artificial Intelligence Institute, which has the mission to secure an interdisciplinary research approach to AGI creation. The first Russian book about the supermind published by Sber is also dedicated to the development of artificial general intelligence. The team of authors who wrote the book includes AI experts from across Russia, and its title was generated by the ruGPT-3 neural network.

Sber and SberCloud presented ML Space, a cloud platform designed for the full-cycle development and use of AI services by businesses of any size. It is the only cloud service in the world that lets you organize distributed training on 1,000+ GPUs due to Sber’s supercomputer, the Christofari. ML Space utilizes Sber’s proprietary AutoML LAMA framework, which helps to automate the main stages of model development, provides auto-validation and calibration, which allows you to create models in a very short time using a regular netbook. This year, Sber also developed the first open-source version of GPT-3 in Russia, which already includes 1.3 billion parameters slated to be expanded to 13 billion.

More than 1,000 data scientists from 43 countries competed in the Data Science AIJ Contest with a prize pool of over RUB7 mn, which was one of the conference parts. Participants, including middle and high school students, presented 2,700+ solutions to practical problems. The competition had three categories (tracks): Digital Peter (create an algorithm for recognizing the manuscripts of Peter I), NoFloodWithAI (write an algorithm for short-term forecasting of Amur water levels), and AI 4 Humanities: ruGPT-3 (develop ruGPT-3 capable of generating very complex meaningful texts upon one request in a human language). The youngest participant was nine years old, and the oldest was 72.

AI Journey 2020 stands out because of AIJ Junior, a series of events for schoolchildren and students which consisted of an open lesson, lectures, quests, and masterclasses on artificial intelligence.

In my opinion, AI Journey 2020 will largely determine the global AI agenda for the coming year. One of the most significant in the world, not only in terms of the number of participants but also in terms of their level, our conference has become a unique platform where people from different industries and countries could pool their experience. We’ve managed to combine scientific expertise with people who make management decisions in business and politics; experienced data scientists with students who are just starting their data science journey. At AI Journey, we’ve seen that Russia is among the AI leaders and announced several solutions that will reinforce our leading positions in this area. Although the conference has just ended, we have started preparations for AI Journey 2021. I am sure that a year from now we will come together again to open another chapter of discoveries and innovations in the artificial intelligence industry, which is growing exponentially. And Russia was, is, and will be one of the key drivers behind AI evolution.

First Deputy Chairman of the Executive Board, Sberbank