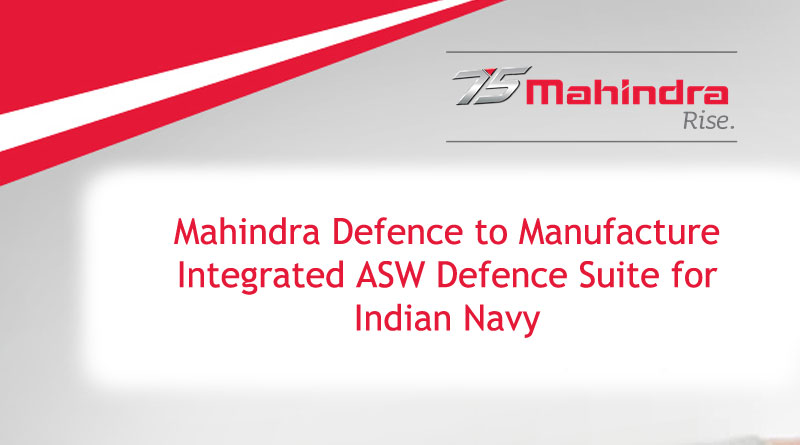 The Ministry of Defence (MoD) has awarded a major contract to Mahindra Defence Systems Limited (MDS) worth Rs 1349.95 Cr for the manufacturing of Integrated Anti-Submarine Warfare Defence Suite (IADS) for modern warships of Indian Navy. Competitive bids from Indian companies were invited by MoD through open tender, wherein the systems fielded were put through detailed trials at sea to prove their capability.

IADS is a high-end underwater equipment that uses latest technology. It is designed to detect and protect warships from underwater threats. It is a versatile system capable of operations from all sizes of warships—small, medium and large. The complex array of sensors in water undertakes surveillance, and provides inputs for signal processing and analysis, to enable necessary action.

Chairman, Mahindra Defence Systems Limited, S.P. Shukla said, “It is the first major contract with the private sector meant for underwater detection and protection from threats. This contract once again epitomizes the success of the Atmanirbhar Bharat initiative.”

This advanced technology system is the first of its kind being developed by an Indian company for Indian Navy. Mahindra Defence qualified by proving the capability of the system through comprehensive testing by the Indian MoD in actual operations at sea before being declared as a winner on commercial bid. Mahindra Defence would be supplying 14 IADS Systems for the Indian Navy warships.