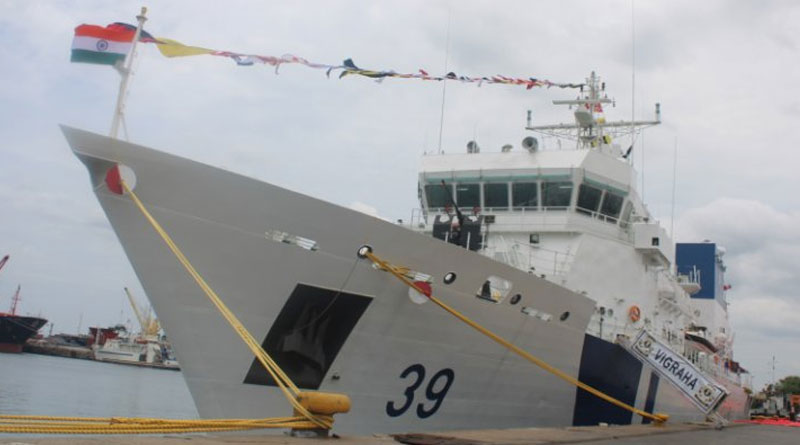 L&T-built Offshore Patrol Vessel ICGS Vigraha was commissioned into the Indian Coast Guard (ICG) by Defence Minister Rajnath Singh in Chennai on 28 August. The delivery of all seven OPVS has been completed ahead of contractual schedule.

A press statement from L&T stated, “ICGS Vigraha is the last vessel in the series of seven Offshore Patrol Vessels (OPVs) built by L&T under an MoD contract signed in 2015. Seven OPVs programme bestowed many laurels to the Indian Shipbuilding Industry, including-

This was achieved during the tough conditions of COVID-19 pandemic by following COVID-appropriate behaviour among all workmen at our shipyards.”

CEO & MD, Larsen & Toubro, S.N. Subrahmanyan said, “Ahead of schedule delivery of all 07 OPVs is a historic milestone in the journey of ‘Atmanirbhar Bharat’ in defence. This feat bears greater significance amidst unprecedented business interruptions caused by COVID-19.”

“L&T has invested heavily and ensured timely readiness of world-class production facilities, covering wide range of India’s needs. Going forward, we expect these facilities to contribute significantly to ‘Make in India’ initiative. With multiple naval shipbuilding programmes on the anvil, L&T is also uniquely positioned to equip the Indian Navy and Coast Guard fleets with modern ships in shortest possible time,” he added.

Whole Time Director (Defence & Smart Technologies) and Member of L&T Board, Jayant D Patil said, “It is heartening to witness the commissioning of ICGS Vigraha, which marks completion of a yet another highly successful naval programme that epitomizes the spirit of Make-in-India. L&T having set numerous records during the execution of 07 OPVs programme, are testimony to our core strengths of innovation, adaptability, commitment and hard work.”

“With unrivalled execution track record, state of the art infrastructure benchmarked to the global best, and robust financial strength, L&T is uniquely positioned to play a leading role in accomplishing ‘Make in India’ in defence in true sense. We shall continue to focus on innovation, quality, speed of execution and extensive use of Shipbuilding 4.0 technologies towards achieving excellence in defence shipbuilding, he further added.”

The ICGS Vigraha is about 98 metres long, 15 metres wide, has 3.6 metres draught, with 2140 Tones displacement and a range of 5000 Nautical Miles. It can attain a sustained speed of up to 26 knots. The entire design and construction process has been certified by American Bureau of Shipping as well as Indian Registrar of Shipping and overseen by the Indian Coast Guard’s resident team at Kattupalli.

Since foraying into defence shipbuilding in March 2010, L&T has epitomized the dynamism, and prowess of private shipyard with in-house design, construction and delivery of 66 nos. defence vessels. L&T is also richly contributing to the upkeep of Indian Naval and Coast Guard fleets by routinely undertaking their repairs/refits and upgrades, including emergency repairs and inspections, with exemplary delivery performance at India’s most modern defence shipyard at Kattupalli, near Chennai.