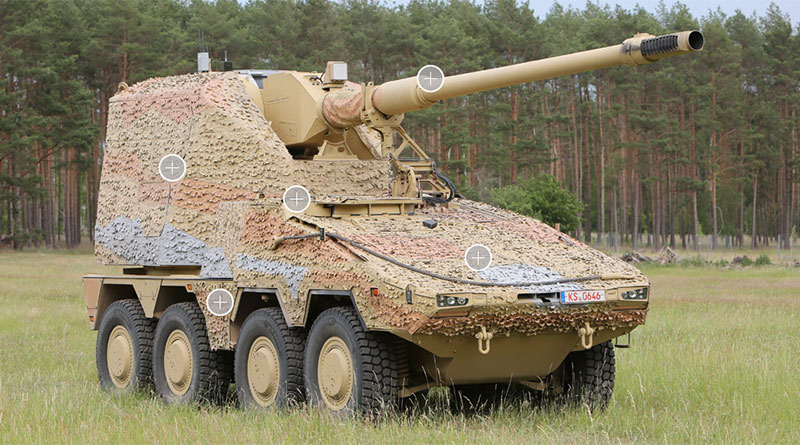 Krauss-Maffei Wegmann (KMW) presented the BOXER tracked vehicle system for the first time at the EUROSATORY 2022 defence trade fair. KMW also demonstrated its systems house expertise with a variety of variants ranging from the wheeled bridge layer to the wheeled howitzer RCH 155, the world’s first artillery system that can fight the battle while in motion.

KMW and NEXTER also highlighted their leading positions in battle tank systems under the umbrella of the holding company KNDS.

KMW underlined its battle tank expertise by presenting the LEOPARD 2 A7, enhanced with the world’s most sophisticated active protection system: the Trophy.

The EMBT technology carrier demonstrated the capabilities of French-German cooperation.

The innovative tracked drive module has an increased level of protection and mobility that is otherwise only comparable to that of heavy tracked vehicles. Since the BOXER tracked is conceptually based on the modular system of the BOXER vehicle family, the drive module can be combined with all BOXER mission modules already introduced.

The EMBT technology carrier demonstrates the capabilities for successful and effective French-German cooperation. The experimental chassis of the EMBT was combined with an innovative new turret concept. In addition to testing already integrated technologies, the EMBT also enables operation by 2, 3, or 4 men.

EMBT is ready for the future integration of ASCALON (140mm) and other turrets.

The major features of the LEOPARD 2 A7 include the Trophy active protection system, which detects and destroys incoming projectiles, a powerful power supply, new NBC and air-conditioning systems and the integration of C4 I systems. The modernisation of the drive train and further weapon stabilisation optimisation during travel enhance the vehicles’ agility and combat efficacy.

The mission module of the IFV (Infantry Fighting Vehicle) variant features a fully stabilised, crewless, remotely controllable turret with state-of-the-art optical and optronic sights that enable 360-degree all-round observation, detection, and identification of targets at long range. The airburst-capable, fully stabilised, automatic 30 mm machine gun makes it possible to engage targets with precision accuracy, even while in motion. The familiar turret construction from the PUMA provides a crew compartment for ten soldiers.

The Remote Controlled Howitzer 155 (RCH 155) is a highly mobile artillery system with superlative crew protection. The RCH 155 is the world’s first artillery system that can fire while in motion. Refined from the combined arms approach, the complete autonomy of the overall system in command, navigation and fire control as well as its system-related stability opens up entirely new deployment options (e.g. firing at moving targets, camp protection, etc.). Thanks to the network-based system architecture of the RCH 155, it will also be possible to implement autonomous driving and action (remote-controlled) in the future.

The bridge module allows the BOXER to mount and lay LEGUAN elements of different lengths and weight classes. It can lay a 22-metre (MLC50) or 14-metre bridge (MLC100) in just a few minutes.

This bridge can be mounted by other LEGUAN bridge systems (e.g. On LEOPARD 2).

Our MULTIBOX solutions make logistics more effective and efficient. Thanks to its high degree of user orientation, it offers all necessary service solutions all the way to the deployment site.

The integrated skid system in this variant ensures that the engine and tyres are ready for use again as quickly and easily as possible.

This MULTIBOX variant can be used for all types of large spare parts.