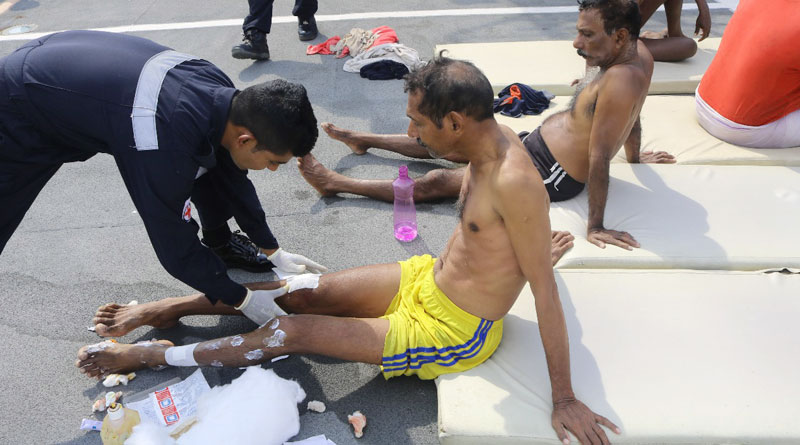 INS Sharda, on March 4, rescued 5 fishermen at sea after their vessel, FV Omkaram, sank 35 km North West of the Azhikal port. Based at Kochi, INS Sharda happened to be on patrol in the area when the fishing vessel sank.

INS Sharda’s lookout spotted the fishermen floating in the water and the ship immediately altered its course towards the survivors for rescue. INS Sharda then lowered its life boats and successfully rescued all five fishermen that were later brought on board. The entire rescue operation was concluded just 10 minutes from the initial sighting of the fishermen. Two fishermen sustained minor injuries and immediately received first aid by the INS Sharda’s medical team while the rest came out unscathed. The ship then returned to Kochi to disembark the recued fishermen.


An official Navy press release highlighted that the fishing vessel had cast off from Cheruvathur in Kasargod early morning on March 4 when the crew noticed water had started entering the vessel which they were unable to control as a consequence of which the heavy flooding led to the capsizing of the small vessel. . All the survivors Manoharan (56) (Boat Owner), Vasav (57), Chandran (60), Suresh (42), Surendran (49) belong to Kanjanghad, Kasargod. The survivors were provided food, water and fresh clothing by the ship’s crew. Efforts are on to inform their next of kin as well as Trikkaripur local coastal police station.

INS Sharda is an Indian Navy offshore patrol vessel based at Kochi. It is currently in its 26th year of commission. It has been actively deployed for coastal surveillance and patrolling off Kerala and the Lakshadweep islands. INS Sharda has also undertaken regular anti-piracy deployments in the Gulf of Aden. The ship played a vital role in the HADR efforts during Cyclon Ockhi and was also extensively used for relief material distribution during Op Madad. Commander R. Anoop currently commands INS Sharda.