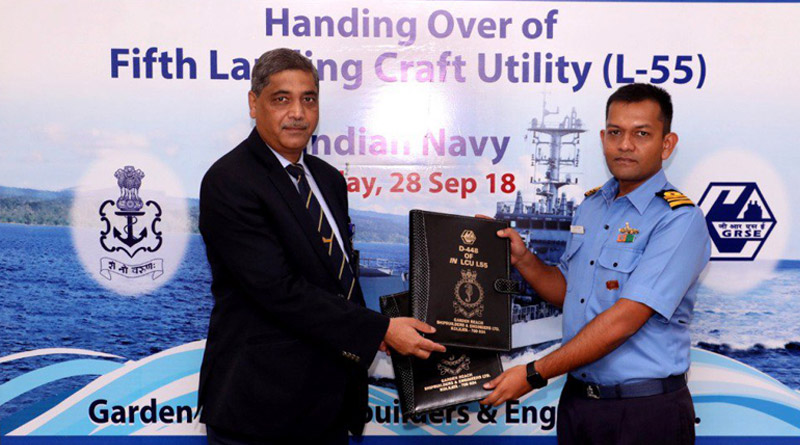 The Ship was Handed Over by chairman and managing director, GRSE, RAdm. V. K. Saxena, (retd) to the Commanding Officer of the ship Lt Cdr Abhishek Kumar at the Ceremony held in GRSE. Chief Staff Officer (Technical) of Andaman and Nicobar Command, Brigadier SY Deshmukh, carried out the final Inspection of the ship prior to acceptance by the Navy. Director (Finance), Sarvjit Singh Dogra, and Director (Shipbuilding), Cmde Sanjeev Nayyar (retd), and other Senior Officials of the Indian Navy and GRSE were also present at the Occasion.

GRSE’s order book is currently going strong with a plethora of revenue-generating projects. With its Rs. 203,136.10 million order book, the firm is definitely on stable ground.


At GRSE, 12 ships are currently under construction with 9 ships (01 ASW Corvette, 03 LCUs, 5 FPVs) in the advanced stages of construction, expected to be delivered to Indian Navy by end 2019. 3 ships of Project P17A Advanced Stealth Frigates with an order value of Rs 192934.60 million are being constructed using Modular Construction Technology along with various software programs like Aveva Marine, NAPA etc. The progress on the 1st ship is moving at a rapid pace & production is running ahead of schedule & production of 2nd Frigate, is slated to commence shortly. GRSE has been declared successful bidders in competitive bidding for another 12 ships (04 Survey Vessels (Large) & 08 ASW SWCs) for the Indian Navy.

These warships, developed by the in house design team at GRSE are believed to be unique in their design and operations with a length of 62.8 metres and achieving a speed of 15 knots with a low draught of 1.7 m. This proves GRSE’s ability to provide end-to-end solutions to their customers ranging from product conceptualization, design, system integration and project management thus increasing the capability to meet customer demands. Key areas of strength of the shipyard include a multi-disciplinary strong design team, production acumen, focused project planning & execution, traits which have helped the Shipyard create strong differentiators in its path of growth.

With the handing over of IN LCU L-55, GRSE has once again demonstrated its’ Commitment to Strengthen the Maritime Security of the Nation, thereby meeting the Aspirations that the Country has Reposed on this Mini Ratna Shipyard.