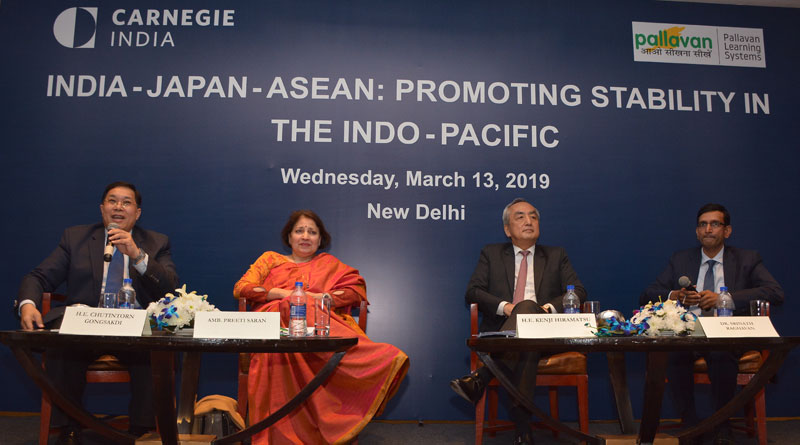 Experts at Carnegie India call for greater engagement of India with the ASEAN member states, calling for maritime security cooperation for peace and stability in the Indo-Pacific

The day-long conference on ‘India-Japan-ASEAN: Promoting Stability in the Indo-Pacific,’ was held in New Delhi by Carnegie India, on March 13, in which the ambassadors of Japan and Thailand to India participated, including a number of eminent experts.

The experts discussed the role of India in engaging with the Association of Southeast Asian Nations (ASEAN) member states, where there is less clarity so far. India has always maintained the position that ASEAN is central to its approach when it concerns the overarching relations regarding the Indo-Pacific region. The participants at the event discussed the evolving role of India and Japan in shaping the geopolitical and trade scenario with ASEAN. There was unanimity over the need for India to play a greater role in the regional peace and stability in the region.

“When we look at the world’s map with such a perspective, we will instantly notice that the major players to shape the future world, i.e., the United States, Japan, China, ASEAN and India can only be well captured by the concept of the Indo-Pacific. What is more, the Indo-Pacific reaches the shore of Africa, which is also endowed with rich natural resources and human capital,” Japanese ambassador Kenji Hiramatsu told the gathering.

The Japanese ambassador to India said ASEAN is crystallising its vision for the Indo-Pacific, and based on its long-term friendship with ASEAN, Japan is eager to engage in further dialogue with ASEAN over how to give shape to the Indo-Pacific we want.

He said Japan is essentially espousing three elements of ‘free and open Indo-Pacific,’ which are – upholding rule of law for security and stability, and the free movement of goods and services among people, enhanced connectivity for economic prosperity, commitment to peace and stability through ensuring maritime law enforcement, by all nations.


In the maritime domain, the panellists highlights three main areas for cooperation among India and Japan – search and rescue operations, HADR and anti-piracy training and exercises. The experts agreed on the rules-based order in maritime and connectivity projects.

“The ASEAN has been continuing its discussions for Indo-Pacific and as of 7th March the ASEAN 10 member states have agreed on an outlook for the ASEAN Indo-pacific region. Now this is at the senior official level, so we still have to go to ASEAN ministers, and then eventually to the EAS Summit, which is in November this year. But at least the issues that we will be discussing now will be things like implementation,” the ambassador of Thailand to India, Chutintorn Gongsakdi said.

“At least two decades, regional players have been involved in the ASEAN region, it’s a part of the Indo-Pacific, but they haven’t been coordinating as much. I think the world now calls for more coordination, amalgamation, and working together makes us better friends and neighbours,” he said.

He said a peaceful, prosperous, friendly indo-pacific region is good for the world. From an ASEAN perspective, Indo-pacific, we always thought about economics. There is an evolving strategic new equilibrium in the region, and we will keep evolving.