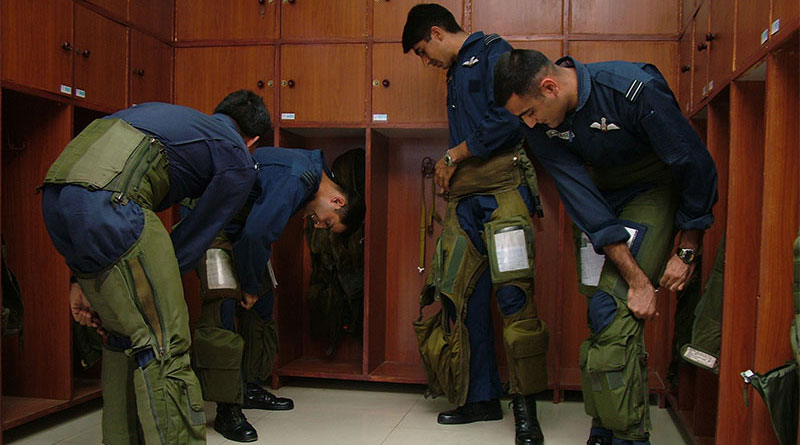 For fighter pilots, flying is fun, office is work – Article republished from June 2005

To put it straight on the table: fighter pilots are a breed apart. Forget the charming, swaggering Tom Cruise in Top Gun zooming in and out of the frame in his fighter plane; the real stuff is even more mind-blowing. And mind you, these are not some private pages from the diary of a breathless teenager. Fighter pilots are a breed apart for a number of reasons and good looks is not among them. This is not to say that they are bad looking, but only to emphasise that looks are as incidental here as in any other profession. Fighter pilots are a breed of young enthusiasts whose lives are dominated by their passions. At least, for the first 10 to 12 years of their career, they care for nothing else and have time for little else. Air Commodore S.P. Rajguru, Air Officer Commanding, 40 Wing at Gwalior says, “We are one of the few professionals in the world who are paid to pursue a passion. As far as fighter pilots are concerned the only working hours are those that you spend away from the aircraft.” Talk to any fighter pilot and he echoes similar sentiments. “When you take-off from the runway, there is a surge of feeling which cannot be described in words. Nothing can equal that,” says one pilot of the 7th squadron, nick-named Battle Axes which is housed in Gwalior. Gwalior, incidentally, is home to the Mirage squadrons of the Indian Air Force and Air Commodore Rajguru was among the officers who had gone to France to bring the aircraft home in 1985. Others with him included Air Marshal Ajit Bhavnani and Air Marshal P.S. Ahluwalia, while the former is now C-in-C Strategic Forces Command, the latter is Director General Inspection and Flight Safety.

To say that fighter pilots go far in the air force is stating the obvious. They are synthesised after a long process of training and testing during which a large number of aspirants fail to make the grade. “Our rate of wastage is very high,” says Wing Cdr A. Singh, a senior pilot of Battle Axes, implying that of all the pilots who want to become fighter pilots only a few succeed. “Our admission conditions are very stringent and only the very best and resilient make it,” he adds. Flying a fighter plane at supersonic speed requires not only above average flying skills but also high level of physical fitness, reflexes, mental strength and courage. During manoeuvres, the aircraft climbs vertically at supersonic speed, plunges down at the same speed, suddenly flips and turns only to zoom off horizontally in another direction; all this in just under a minute. One can imagine what pressure the body goes through. “The beginners sometimes feel nauseous, but being a fighter pilot means managing that and having a control over your body,” says Singh. Moreover, sitting alone in a cockpit, flying at the speed of 800-900kmph, the pilot has to take crucial decisions (sometimes with life and death consequences) in a split second. Though he is always connected to his base, decisions are usually his to make, which demands a very alert mind. Says Singh, “In a close combat situation, sometimes two aircraft come very close to one another from opposite direction. So if both of them are flying at the rate of 800kmph, to the pilot the speed would appear to be 1,600kmph, which is phenomenal. His decision has to be made in less than 1/10 of a second. One may think that one’s reflexes are very sharp, but unless you are put in a situation like this you wouldn’t know.” And there is no time to know because mistakes can be dangerous, even if they are not fatal.

Little wonder then, the pilots strut almost insolently on the scorching tarmac, clutching their helmets, each confident of his ability and each raring to go. Having made the grade, they know that they are the chosen ones, as far as professional, physical and mental ability go. Gwalior is not among the friendly places in summer. The temperature often crosses the 45 degree mark, with the tarmac burning at almost 50 degrees. The sheer heat of the sun sears the skin. But the pilots who spend a good part of the day on the tarmac remain undaunted. The heat is debilitating and weakens a person’s performance, but they manage. The day begins very early. Waking up at around four in the morning, the pilots go through their daily medical check-ups. “This is as sacred as a ritual,” says Air Commodore Rajguru. “The pilot has to be 100 per cent fit before he is cleared for flying on a particular day. His blood sugar level has to be just right. If he shows any signs of fatigue or restlessness he is laid off. When you are flying at a very high speed in a high altitude environment, you are in any case pushing your endurance level. If you aren’t 100 per cent fit, you may collapse during the flight.

”Medical check is followed by a briefing, which depending upon the mission/exercise can go on for nearly an hour. The mission leader, who briefs the participating pilots, runs through the aims and objectives of the mission touching upon the role of each pilot, the safety precautions, conditions under which it can be aborted and so on. Everything is worked out to the last detail so that there is no room for any doubt. Then there is just enough time for the pilots to grab a bit of cereal before they change into G outfit and hit the tarmac. ‘G’ stands for gravity, and flying at supersonic speed against the earth, the pilots challenge the gravitational pull. As a result, the blood rushes into the legs and as it does not reach the heart, it does not get pumped into the brain. The vision gets blurred and the mental faculties become lethargic. To prevent this, all fighter pilots are required to wear G suits which are fitted with wires and valves to ensure that blood does not collect in the feet and also a regular supply of oxygen is available to the pilots. The suit also comes with an in-built parachute device which helps the pilot eject from the cockpit and land safely in case of an accident.


Once all this gets in order, pilots briefly check the aircraft before boarding it and after taxiing on the runway for a few minutes take-off. “It is true that one feels moments of anxiety, probably a little bit of nervousness depending upon the nature of the mission/exercise, but everything vanishes once you take-off. After that, it is pure exhilaration,” says Flight Lieutenant Prateek, who has been nicknamed Bugs Bunny by his colleagues. On completion of the exercise/mission which can last from one to five hours, the pilots head for food and then collect in the briefing room for debriefing. This sometimes goes on for over an hour as here the mission leader goes over the execution of the mission including the mistakes, if any made by the pilots. The mistakes vary, from innocuous to serious but each is dealt with in detail during the debriefing. Singh says, “A lot of errors pertain to the timing of separation or maintaining of altitude after a manoeuvre. Then there can be serious tactical mistakes which may defeat the purpose of the exercise. Whatever the nature, we look into all aspects and how they could have been avoided.”

On an average, a pilot flies for a maximum of five hours in a day; it may be one sortie or more depending upon his tasking. Sometimes after the debriefing session a pilot may go on another sortie after a break or at other times call it a day as far as flying is concerned. After each sortie the pilot gets a lay-off period ranging from 11 hours to 18, during which he is not supposed to fly. “We are not just fighter pilots, we are also officers in the Indian Air Force,” explains Singh. “We also need to do the office work, attend to paperwork and stuff.”

While flying is a passion for all of them, it is certainly not all fun and game as it comes with its share of stress. Ironically, the biggest stress-inducing factor is flying itself: during the course of the flight, the pilots are strapped inside the cockpit with no movement at all. This puts pressure on the body of the pilot, so that when they come out, they need to shake-up their limbs till their blood circulation comes to a normal. “Besides, if you are flying for five hours and you are not doing too many manoeuvres, then there are chances that boredom may set in,” says one pilot, who is immediately contradicted by another, “There is never a dull moment,” he says. Playing peacemaker Singh says that stress and fatigue are issues which they deal with constantly as maintaining a very high level of fitness is absolutely important. “All pilots are required to spend some time in the playground, either playing team sport with the men or going for a run,” he says. Besides, it is not just the medical officer who checks the pilots daily, each pilot has to understand his body and when he does not feel 100 per cent okay he reports to the doctor. Absolutely nothing can be taken for granted.

Family life also gets affected, though the enthusiastic pilots wouldn’t say so except for admitting that for them, the first love remains flying. Given the hectic schedule, socialising or even spending long hours with the family get curtailed. Most often the pilots leave home in the wee hours of the morning when the rest of the family is asleep. “You can’t even have breakfast at home because it is not fair to ask your wife to prepare your breakfast at four in the morning,” says Air Commodore Rajguru. In the Battle Axes family, only two pilots are bachelors, everyone else is married. And it is not difficult to guess who consider themselves luckier. Says one bachelor, who probably is the youngest as he is constantly teased by the senior pilots, “I have no pressures on me. When I am not flying, I can watch DVDs. Basically, I am having a blast.” As a parting shot, one senior and married pilot says, “You should put his picture on the cover. Some girl might hook him then.” Till then it is blue skies for company.