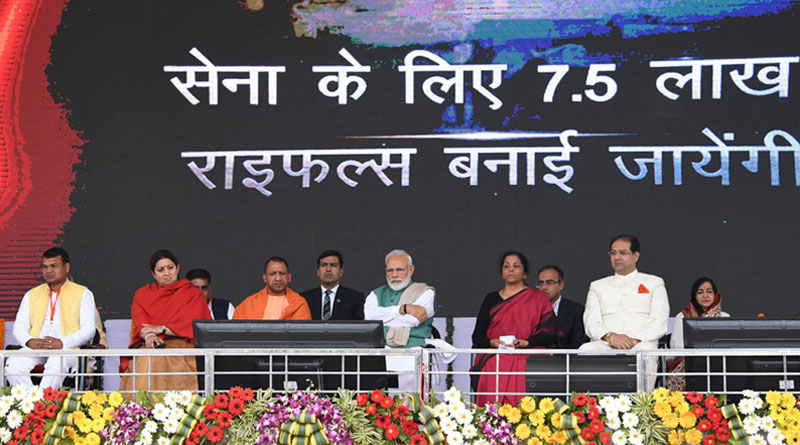 The Indo-Russia Rifles Private Limited, as the joint venture is called, will have a 50.5 per cent stake of India’s Ordnance Factory Board (OFB), while the Russia-based Kalashnikov will have 42 per cent share and Rosonboronexport will have 7.5 per cent.

It has been a long struggle for the Indian Army to acquire basic modern infantry weapons, ranging from assault rifles and sniper guns to light machine guns and close-quarter battle carbines, after a string of failed attempts during the past decade. It was finally in 2018 when the decade-old replacement programme for the INSAS rifle finally witnessed progress.

Following Russian defence minister, Sergei Shoigu’s meeting with defence minister Nirmala Sitharaman in December 2018, the quest to procure 7.62×39 mm caliber AK-203 rifles is now fulfilled with inauguration of the factory. The deal for the AK-203s is an inter-governmental agreement (IGA), which underlines both joint production and joint development of the latest Kalashnikov rifles. Within the joint development, India will obtain all the intellectual property rights for jointly designed and developed product.


Commenting on the JV, CEO Rosoboronexport, Alexander Mikheev said, “The commissioning of the JV for production of the AK203 is by all means a milestone in our partnership under the Make in India initiative. Nobody has offered India such deep and thorough localisation opportunity with a rather high production quantity involved and it is unlikely that somebody will in the near future. The capacity of the plant is sufficient to arm the personnel of all security agencies in India. Should it become necessary, the parties will be able to ratchet up the production output and upgrade the facility to manufacture future models based on Kalashnikov’s unique design.”

“India is the first country to have launched production of the 200-series of the world-famous Kalashnikov brand. We sincerely congratulate our Indian colleagues and citizens of Uttar Pradesh on this remarkable occasion, stressing a high level of trust and unquestionable strategic partnership between India and Russia in the defence and security domain,” he added.

The 200-series of Kalashnikov rifles is an improved and modernised version of the 100-series, the development of which started in 2016. The 200-series Kalashnikov rifles come with the same basic design, layout and major features, but have significant advancements, including improved ergonomics and modern accessory interfaces. The AK-203 rifles can host an under-barrel grenade launcher or a bayonet, and the magazine can hold 30 bullets, and can fire 600 rounds a minute.

An effective range of 400 metre at 100 per cent accuracy gives them a unique edge over older series of rifles, and as compared to INSAS, AK-203 is lighter and shorter. The 200-series rifles can be equipped with quick-detachable tactical sound suppressors, besides, the gun holds NATO-grade ammunition of 7.62 mm.

The decision to go ahead with the AK-203s to be made-in-India came in the wake of DRDO’s 2017 proposal to the Indian Army to replace the present INSAS and AK-47s with their own Excalibur rifle which was ultimately rejected due to several problems with the multi-calibre platform.

While the Russian OEM Kalashnikov had been looking for an Indian JV partner since 2014, it was only in early 2018, that state-owned OFB was chosen. The Indian government is looking to achieve 100 per cent indigenisation for the AK-203s.

The contracts envisages a graded time-scale for localisation, with the army progressively receiving more ‘Indian’ guns, until later batches are fully and truly locally built. The MoD which was looking for highly accurate rifles with a high rate of fire meant for troops on the frontlines, and a lighter one at that meant for regular infantry resulted in the finalisation of AK-203s for the armed forces.

Since the INSAS rifles are not only outdated but also prone to a plethora of major functional issues like jamming, this procurement would be a big boost to the army’s assault rifle inventory.

The procurement of seven lakh AK-203s forms the first part of the two-prong procurement initiative of the Indian Army. In February 2018, the MoD floated a tender to procure 72,000 assault rifles and 94,000 close-quarters battle (CQB) carbines. While the made-in-India AK-203s will go to regular infantry units, 72,000 of higher performance rifles will be deployed with troops on the frontline mostly in counter-terror roles. In September 2018, the US-based Sig Sauer SIG 716 was chosen as the lowest bidder (L-1) in the tender for the 72,000 assault rifles.