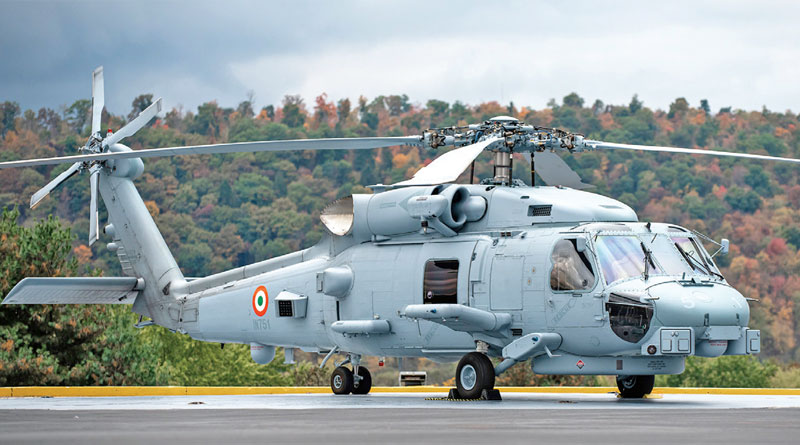 LOCKHEED MARTIN IS SHOWCASING its diverse portfolio of defence capabilities and solutions at the 13th edition of Aero India 2021. The company’s exhibit this year includes a broad span of state-of-the-art capabilities, including the F-21 aircraft, MH-60R ‘Romeo’ multi-mission helicopter, the S-76D helicopter, and the C-130J Super Hercules aircraft.

“Aligned with the Indian government’s ‘Atmanirbhar Bharat’ Abhiyaan and the ‘Make in India’ initiative, we look forward to participating in Aero India 2021 and reinforcing our commitment to supporting the growth of an indige nous defence manufacturing ecosystem while continuing to deliver our best capabilities to support the Indian MoD and Services,” said William (Bill) Blair, vice president and chief executive, Lockheed Martin India. “We see tremendous strength and opportunity in India’s defence industry—both public and private including start-ups and Micro, Small & Medium Enterprises (MSMEs). Aero India serves as an excellent platform for us to explore new partnerships and strengthen existing ones.”

Lockheed Martin’s presence at the show will be in strict accordance with COVID-19 protocols laid down by the ministry of defence and state government to ensure the safety of employees and visitors.

The prime attraction at the Lockheed Martin’s stand is the F-21 fighter aircraft, which is on offer to the Indian Air Force (IAF). The company is leveraging both 4th and 5th generation technologies to offer the best solution to meet or exceed the IAF’s capability needs, provide Make in India industrial opportunities, and accelerate India-US cooperation on advanced technologies, including but not limited to fighter aircraft. The F-21 demonstrates Lockheed Martin’s commitment in delivering an advanced, scalable single-engine fighter to the IAF—For India, From India.

The Indian Navy’s most recent rotary wing acquisition, MH-60R ‘Romeo’ SEAHAWK® helicopter, also occupies a prominent place at Lockheed Martin’s Aero India display. The MH-60R is the world’s most advanced maritime helicopter and brings vital anti-submarine and anti-surface warfare capabilities to the Indo-Pacific region. The MH-60R is the latest thread in the stories of Lockheed Martin and US-India partnerships.

In fact, it is the largest contract Lockheed Martin has ever signed with India. The first batch of the MH-60R helicopters will deliver to India in 2021. The S-76D helicopter has an unmatched record of safety and reliability.

The S-76D helicopter delivers the safety, reliability and efficiency customers have come to expect from the S-76 family of aircraft, but with faster cruise speed and more efficient fuel burn. In all roles, including the difficult Search and Rescue role, it has been incredibly well received providing a stable, low workload, reliable platform and speed, for when minutes matter. With S-76-class helicopters working for customers all over the world on a diverse set of operations, it’s well positioned to meet growing global customer needs.

On display at the show is India’s workhorse, C-130J Super Hercules airlifter, represents a strong legacy of partnership between India and the US. The IAF has been extensively using its fleet of 12 Super Hercules for humanitarian efforts in the wake of the Covid-19 pandemic, as well as to support the movement of troops and material to support regional military operations. All C-130Js now built and delivered around the world have major components manufactured in India through Tata Lockheed Martin Aerostructures Limited (TLMAL), a joint venture located in Hyderabad that has the distinction of being the single-global source of C-130J empennage assemblies.

As part of the Javelin Joint Venture, Lockheed Martin also produces the Javelin anti-tank guided missile system. This versatile and effective one-man-portable and platform-employed multi-target precision weapon system provides capability to defeat a broad spectrum of close combat threats on the modern battlefield. Using fire-and-forget technology, the weapon guides itself to the target without external commands, allowing soldiers to take cover or reposition. With a range of 65 metres to four kilometres in most operational conditions, as well as the ability to operate through adverse weather and battlefield obscurants, Javelin can be deployed in a variety of environments and conditions.

Lockheed Martin has nearly 240 suppliers—including MSMEs that feed into its two joint ventures, TLMAL and Tata Sikorsky Aerospace Limited—that benefit from the vision of Lockheed Martin and Tata working together. Lockheed Martin has integrated more than 70 Indian suppliers, including MSMEs, into its global supply chain. At the show, the company representatives will discuss partnership opportunities with Tier 1 suppliers and prospective Indian industry partners that strengthen India-US defence industrial ties and ‘Make in India’ opportunities.

Lockheed Martin is in Hall B, Stand B3.8