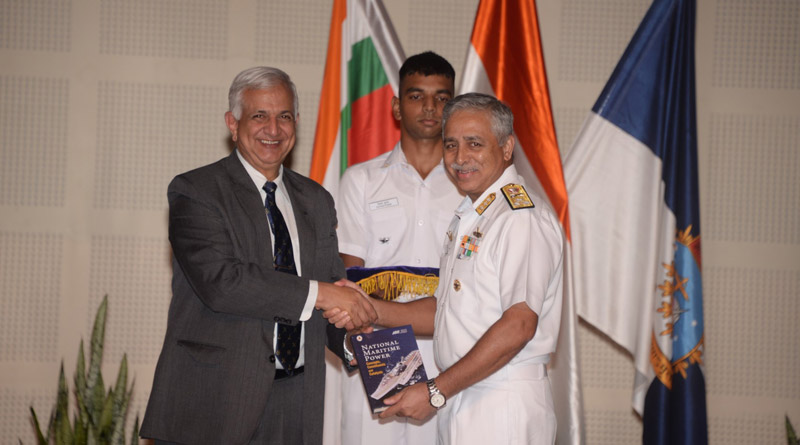 The fifth iteration of the Dilliseries Seapower Seminar on ‘Geopolitical Impact of Sea Power’ kicked off at the Indian Naval Academy on 11 October 2018. The two-day seminar saw attendance from several serving senior Naval officers, academicians, and luminaries. Dr T. C. A. Raghavan, a former diplomat who also served as the High Commissioner of India to Pakistan, started the seminar with an invitational talk on ‘Integrating the Continental and the Maritime in our Foreign and Strategic Policies.’

The first session of day one named ‘Sea Power and Colonisation’, chaired by Cmde Odakkal Johnson, commenced with a presentation on ‘The Battle of Diu’ authored by Dr Anupama Ghosh, and presented by VAdm Pradeep Chauhan, AVSM & Bar, VSM (retd.). The presentation analysed naval battles in the decade following Vasco da Gama’s arrival at Calicut and his voyages in the larger geo-politics of those times. The causes of the defeat of combined forces led by Zamorin and the impact it had in the history of India was also covered. The second paper was presented by Cdr Yogesh V Athawale on the subject ‘Of Places and Bases – How Naval Strategy for Trade Protection Impacted Anglo – French Colonial Rivalry in the Indian Ocean’. The officer is a specialist in Anti-Submarine Warfare (ASW). The salience of sea power in shaping up the strategy of colonial contestants and its decisive role in determining the outcome was also narrated in the course of the presentation.


Session two of day one named ‘China’s Belt and Road Initiative’ chaired by Cmde Sushant Dam, VSM commenced with a paper by RAdm Dhiren Vig, Addl. Director General, Project Seabird, on the subject ‘One Belt One Road’. The paper discussed the Belt Road Initiative by China and its maritime dimensions. Capt V. C. Mehra, Commanding Officer, INS Ranjit delivered his paper on the topic ‘Chinese Sea Power and the Belt and Road Initiative: A Mahanian Blueprint to Colonisation in the 21st Century’. The paper highlighted certain elements that are essential for developing sea power according to the book Mahan and the manner in which China is applying it.