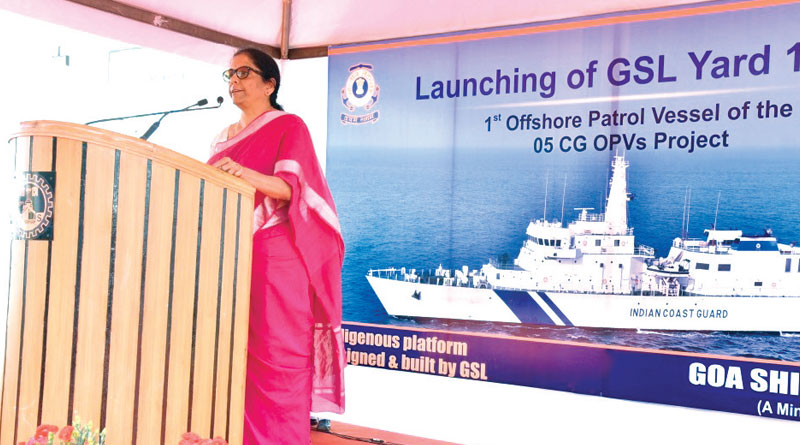 The ongoing shipbuilding project for five OPVs is one of the biggest orders being executed by GSL for the Indian Coast Guard. This indigenous project was launched by the Prime Minister on 13 November 2016 and the keel of the first Vessel was laid on 20 March 2017 by ADG K Natarajan. The Vessel is in advance stage of outfitting and will be ready for delivery by January 2020.

Entirely designed in-house by the professionals of GSL, these OPVs will form a formidable part of the coast guard fleet and used for protection of Exclusive Economic Zone of territorial water of the nation. These vessels will be fitted with most modern and technologically advanced machinery and computerised controls systems, making them the most advanced patrol vessels in service with the Indian Coast Guard, on delivery. These 2400 tonnes vessels will be equipped with features like quick response boats for rescue and anti-piracy, gunnery simulators and many more advanced features. The hull would be the most efficient form designed by GSL and would provide for fuel efficiency, crew comfort and excellent sea-keeping qualities.


Recognising the excellent efforts and achievements of Goa Shipyard, defence minister congratulated the personnel of Goa Shipyard and Coast Guard for the launching of the Vessel. She acknowledged that tremendous contribution of Goa Shipyard in indigenous shipbuilding, catering to the acquisition requirements of the Indian maritime forces. She also commended the efforts of GSL in export of two advanced OPVs to Sri Lanka and two FPVs and 11 FICs to Mauritius. She further stressed on the need to capitalise on the consistent superior production performance of the Shipyard and cater for the captive requirements of Indian defence services and reach out for exports. She also assured full support of the ministry of defence in all the endeavours of the Shipyard.

Speaking on the occasion DG, Coast Guard, Rajendra Singh also praised GSL for its professionalism in persistent delivery of quality ships, within the contractual delivery timelines. He lauded that bonhomie and partnership between Coast Guard and GSL in design and construction of significant number of vessels for the Indian Coast Guard.