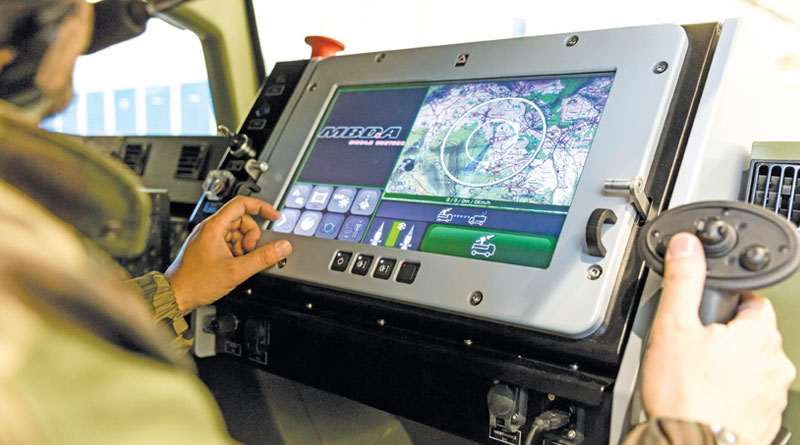 MBDA presents the Atlas-RC/LIC²ORNE combination which, together with the Mistral missile, provides a substantial protection to mobile units, while fully integrated into the theatre air defence network and portable on light armoured vehicles.

The Mistral is an extremely reliable fire-and-forget air defence missile, with a success rate of nearly 95 per cent. Equipped with an infrared imaging seeker and advanced image processing capabilities, the Mistral offers excellent countermeasure resistance and can engage low thermal signature targets such as UAVs and turbojet-powered missiles at long range, in addition to the usual combat aircraft and helicopter targets.

The Atlas-RC is an automated turret, carrying two ready-to-fire Mistrals and controlled from the cabin of the vehicle. It is equipped with day/night sensors for fire control and tracking.

LIC²ORNE is a command and control unit, developed from a set of software components that have already been proven on MBDA’s Mistral and VL MICA air defence systems. It can coordinate up to 8 Atlas-RC systems and connect them to higher-level command systems, including via advanced links such as Link 16 or satellite links. With its ability to use radar or electro-optic sensors, LIC²ORNE ensures that the Atlas-RC turret has enough early warning to make full use of the Mistral’s firing envelope.


Thanks to LIC²ORNE’s open architecture, MBDA has been able, in just a few months, to build in defences against mini and micro UAVs. These defensive systems can now protect the firing unit against terrorist actions or asymmetric commando attacks.

“Drawing on the lessons of recent conflicts in Europe or the Middle East,” says military advisor land systems, MBDA, Francis Bordachar. The Atlas-RC/LIC²ORNE combination is designed to provide a real air defence and engagement capability in the lower layer while ensuring very high mobility to accompany and protect mobile detachments and frontline units. The deployment of an air defence system as close as possible to ground units is once again becoming a necessity, and a key survivability factor for ground forces.”