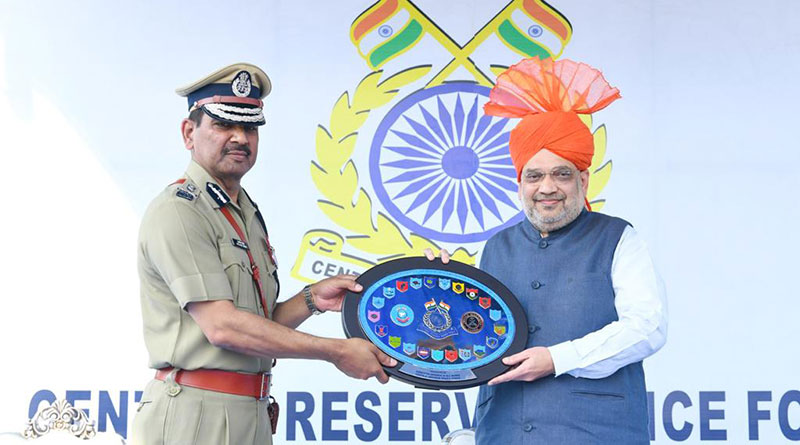 On 19 March 2022, the Central Reserve Police Force (CRPF) celebrated its 83rd CRPF Day at Maulana Azad Stadium, Jammu.  On the same day in 1950, then Home Minister of India, Vallabh Bhai Patel had presented the ‘Presidential Colours’ to the CRPF in 1950. With the aim of taking the celebrations to different parts of the nation, the force had decided to celebrate the 83rd CRPF Day in Jammu this year.

The parade that happened outside of Delhi NCR for the first time, saw Home Minister Amit Shah take salute of the parade. Besides felicitating the Gallantry Medal awardees, the Chief Guest distributed trophies to distinguished CRPF institutions for their performances.

The parade was followed by several events demonstrated by the soldiers like the fusion of sports, the Malkhambh, the women’s rifle drills in tune with women’s pipe band, the Silambam, as well as a dance performance.

In his address, the Minister lauded the CRPF and its contribution in maintaining the internal security of the nation. While paying homage to 2340 soldiers of the force who died while serving the country, he remarked, “I am proud of CRPF, the whole nation is proud of CRPF”. He also praised the CRPF for its effectiveness in performing duties assigned to it.

DG CRPF, Kuldiep Singh in his address spoke at length about the diverse duties performed by the CRPF in maintaining internal security of the nation. He reaffirmed the unwavering loyalty and the steadfast devotion and dedication of the soldiers of the force to the service of the nation.