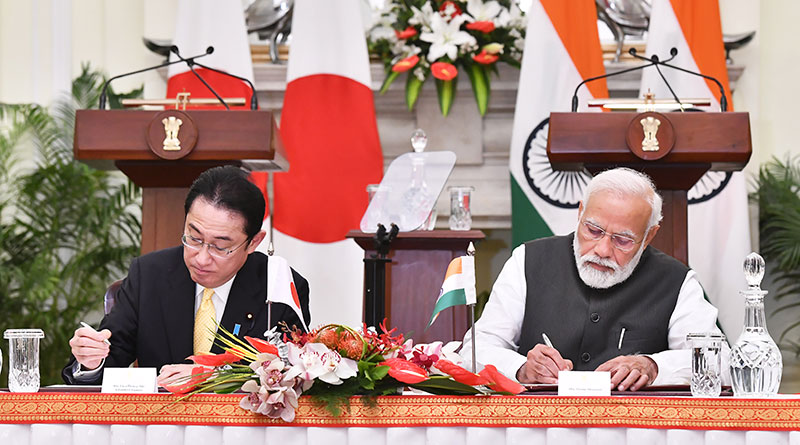 The two countries set an investment target of five trillion yen (42 billion USD) in the next five years. The two sides have surpassed their previous target of 3.5 trillion-yen Japanese investment between 2014-2019. The last India-Japan Annual Summit was held in October 2018 in Tokyo.

The two prime ministers discussed China during their meet in New Delhi. India pointed out the Chinese menace at the LAC, while Japan spoke of China’s aggression in the East China Sea and South China. Foreign secretary Harsh Shringla said any normalcy in the India–China relationship would depend on the progress on the LAC de–escalation talks, indicating that the proposed visit of Chinese Foreign Minister Wang Yi would need to focus on that.

Indian Prime Minister Narendra Modi and Kishida also held a separate meeting to discuss the ongoing Russia-Ukraine war. The two countries differ in their worldview in this regard. While Japan has outrightly and consistently criticised Russia’s Ukraine invasion and imposed several sanctions on Russia including economic and oil equipment export bans, India has constantly abstained to vote for any resolutions criticising Russia. Indian companies have in fact even stepped up their intake of Russian oil. During the discussion, the Prime Minister Modi however did not make any direct reference to the situation between Russia and Ukraine.

“Russia’s invasion on Ukraine is a grave development that shakes the fundamentals of the international order. And we need to resolutely respond to the situation. I spoke to PM Modi about this and said we should not condone or allow this kind of attempt to unilaterally change the status quo by force in any region of the world,” Kishida said in his press statement. Shringla said that the two leaders had discussed the need to abide by the UN charter, respect international law and territorial sovereignty and to adhere to nuclear safety norms.

In a joint statement, released at the end of the summit, the two countries said that they reiterated their call for an immediate cessation of violence and noted that there was no other choice but the path of dialogue and diplomacy for resolution of the conflict. The leaders affirmed that they would undertake appropriate steps to address the humanitarian crisis in Ukraine.

The ‘2+2’ meeting of Foreign and Defence Ministers of India and Japan coming up in the next few months will take forward agreements on the strategic partnership. Prime Minister Modi is expected to visit Tokyo in May or June, where he will hold another bilateral summit with Kishida and attend the Quad summit with the U.S. President and the Australian Prime Minister.

“Today, I am visiting India, making my first bilateral visit since my appointment as Prime Minister. Linked by universal values such as freedom, democracy, human rights, and the rule of law, which have been shared through a long history of exchange, Japan and India are “Special Strategic and Global Partners,” which share strategic interests. In this milestone year, marking the 70th anniversary of the establishment of diplomatic relations between Japan and India, I am dearly looking forward to this visit, the first by a serving Prime Minister of Japan in four and a half years, and to be able to feel for myself the tremendous dynamism of India.”