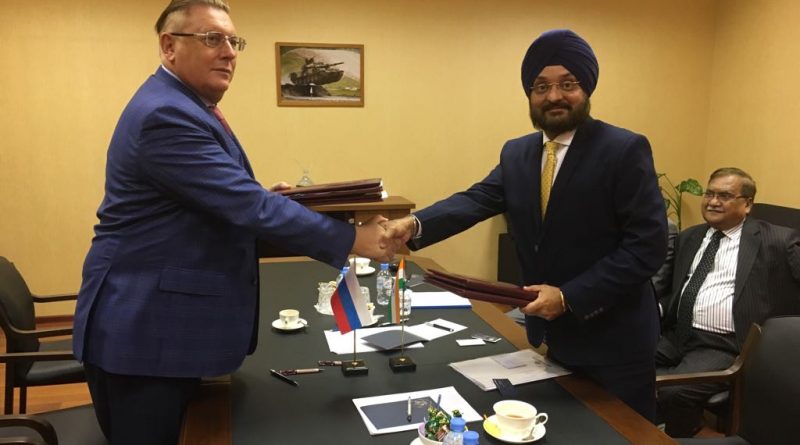 Ashok Leyland Defence Systems (ALDS) signed a Memorandum of Understanding (MoU) on Cooperation with Russia’s Rosoboronexport, on the sidelines of the International Military Technical Forum Army – 2017 held at Kubinka, near Moscow, on 25 August 2017. The Indian delegation to this forum was led by Ashok Gupta, Secretary (Defence Production), government of India.

Rosoboronexport (ROE) is the only state organisation in Russia for export of the entire range of military products and technologies. ROE represents Russian companies who are manufacturers of infantry fighting vehicles and main battle tanks, currently working with the Indian Army.

ELCOM Group is emerging as a significant player in strategic electronics, avionics and tactical communication globally.

Ashok Leyland (AL) is one of the world’s largest manufacturer of vehicles and has been a supplier of logistics and special role vehicles to the Indian Army for the past 25 years.

Congratulating ALDS, ELCOM and the Rosoboronexport team, managing director of Ashok Leyland, Vinod K. Dasari said, “Ashok Leyland is fully committed to make Prime Minister’s ‘Make in India’ in defence sector, a resounding success. The signing of this MoU is a step in the direction as this new partnership allows Ashok Leyland to provide all types of Tracked Vehicle Solutions to the armed forces.”

Signing the MoU on behalf of ALDS, Head – Defence, Ashok Leyland, Amandeep Singh said, “We are happy that Rosoboronexport has chosen ALDS and ELCOM as its partners in India to address the Tracked Vehicle Upgrade Programs of Indian Armed Forces. The issue of indigenisation and availability of service and parts, which has been an area of concern, will now be addressed as ALDS and ELCOM will be responsible for manufacturing in India and also for providing life cycle support.”