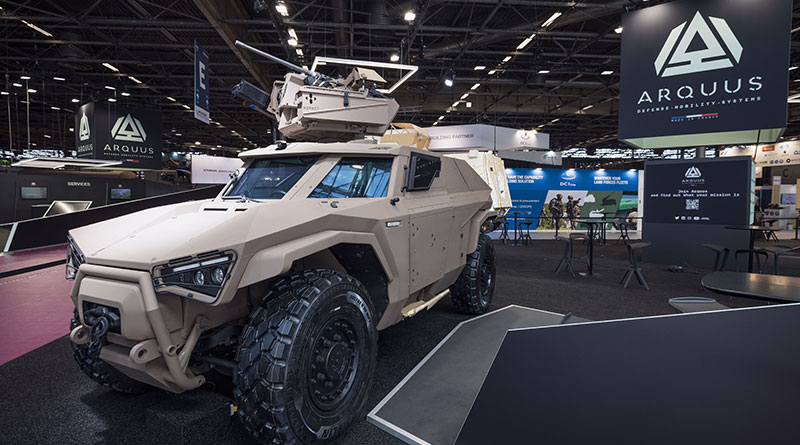 In a press release Arquus said that Scarabée is a tribute to Arquus’ expertise in designing reconnaissance, scouting and combat vehicles. It is a product thought for export markets, which aims at conquering new markets in the fields of recon, cavalry and high-intensity anti-tank combat. Scarabée is also Arquus’ effort towards the future VBAE (Véhicule Blindé d’Aide à l’Engagement, Armored Vehicle for Engagement Support) program which aims at renewing the French Army’s VBLs, as well as supplying partner European armies with light armour capabilities.

Arquus has already started working on VBAE, crafting ideas, concepts and technologies as well as finding partners in Europe for that project. Arquus notably takes part in the FAMOUS initiative sponsored by the European Defense Fund. With Scarabée, Arquus has clearly positioned itself as a leader of light armoured vehicles, in France as on export markets.

The Scarabée exhibited at Eurosatory has evolved since its last appearances in le Bourget (2019), the Arquus Day (2020), IDEX (2021) or the Arquus Technoday (2021). It is presented in a reconnaissance & combat version, with a 12.7mm and AKERON Hornet RCWS on top.

First, and to better answer clients’ needs, the sliding doors have been changed and replaced by regular doors, which offer protection to the crew in dismounted combat. That version differs from the air assault and urban combat presented before, which aimed at compacity and increased modularity, even inside a plane.

The Scarabée is also fitted with brand-new cameras from Bertin, which grant it unique night vision & driving capabilities. Paired with the fully-electric mode which offers extremely silent mobility and low thermal signature at low speed, these capabilities redefine the Scarabée as a vehicle very well adapted to night combat. Such capabilities can be further enhanced thanks to collaborative combat modes.

The Scarabée is equipped with new, state-of-the-art Michelin tyres, which further increase the vehicle’s stealth and reduce its footprint.

The recent combat experience has shown that anti-tank combat capabilities are key in a highly contested, highly intense battlefield. The large number of armored targets, and the rhythm of combat operations call for the integration of multiple anti-tank weapons on armoured vehicles, to allow for tank-hunting and collaborative combat capabilities, or to provide with self-defense options in case of an unplanned encounter with enemy assets.

Such a capability is now integrated in the Hornet RCWS, which now offers anti-tank capabilities on top of its native qualities. The AKERON missile is integrated on the side of the RCWS, which preserves the compact size of the Hornet and contributes to its stealth.

That configuration is very sensible on the Scarabée as Arquus’ new generation reconnaissance vehicle. It reminds of the VBL Milan while adding several operational capabilities.

It will load up to 5 missiles depending on vehicle configuration.

The Scarabée retains its native qualities: ‘excellent mobility thanks to its powerful engines and its two steering axles, very short turning radius, huge acceleration capacity to react to threats or rush to an objective, high protection with its aluminum cell, large internal space, adaptable ground clearance, excellent observation abilities behind the windshield, on top of its innovative electromobility, energy production and storage and full-electric mode.’

The Scarabee is the first military hybrid-drive armoured reconnaissance car ever. Compact, highly mobile and stealthy, the Scarabee can tackle any environment, from desert combat to confined or urban environment. Versatile and modular, it can serve as a reconnaissance car, a light cavalry vehicle fitted with a powerful autocannon, a missile-carrying tank killer or a mobile command post. It can serve in air assault units or quick reaction forces, accompany infantry units or pair up with Main Battle Tanks.

Thanks to its electrical machine and its high-capacity batteries, the Scarabee can move and accommodate and action several sensors and energy-consuming systems while being silent. As the new definition for reconnaissance vehicles, it is suitable for modern armies seeking to equip themselves with light, versatile, highly mobile and powerful vehicles.