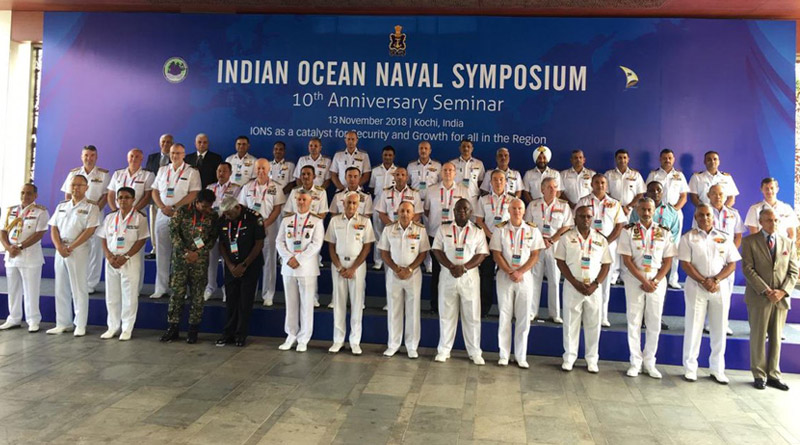 26 nations participating in the seminar themed ‘IONS as a Catalyst for SAGAR’, in Kochi to discuss mutual maritime issues of member states

The tenth anniversary celebrations of the Indian Ocean Naval Symposium (IONS) have kicked off in Kochi. The seminar saw the participation of 26 of the 32 nations who are the members of IONS.

The Chairman Chiefs of Staff Committee and Chief of the Naval Staff, Adm. Sunil Lanba, accompanied by Reena Lanba, president Navy Wives Welfare Association attended the seminar at Kochi, besides the other guests and foreign delegates.

In line with the vision of Prime Minister, Narendra Modi – “SAGAR” (Security and Growth for All in the Region) – the theme for the 10th anniversary seminar is “IONS as a Catalyst for SAGAR”. SAGAR is in consonance with India’s Act-East policy and the nation’s diplomatic, economic and military outreach in the region, said the Indian Navy statement.


Speaking at the opening address, Adm. Sunil Lanba said he hoped to move to a full-scale Humanitarian Assistance and Disaster Relief (HADR) exercise within the IONS framework. He said the Indian Navy will soon operationalise the Information Fusion Centre (IFC) for the Indian Ocean Region (IOR), which will be staffed by the personal from many countries, to analyse all inputs pertaining to maritime security in the IOR. He said the information sharing mechanisms amongst the members will help to identify threats, necessary to be able to take necessary action.

Lanba further said the Exercise Sea Vigil will be conducted over a 36-hour period in January next year, to involve all states, maritime security agencies to focus on coastal security.

On the occasion, Japanese Navy Chief of Staff, Adm. Murukawa, said the IONS was comparable to a big ship protecting the Indian Ocean. He said the ship will keep sailing as long as the members shared a common objective, notwithstanding the differences in the crew members.

The seminar witnessed absence of several nations, including Pakistan, with extensive participation of Japanese and Iranian Navy representatives – China kept it a low key affair. The seminar had deliberations on leveraging IONS for coordinating & sharing resources for maritime operations in IOR, focused on a number of other issues, including the apprehensions of Chinese naval activity in the region.