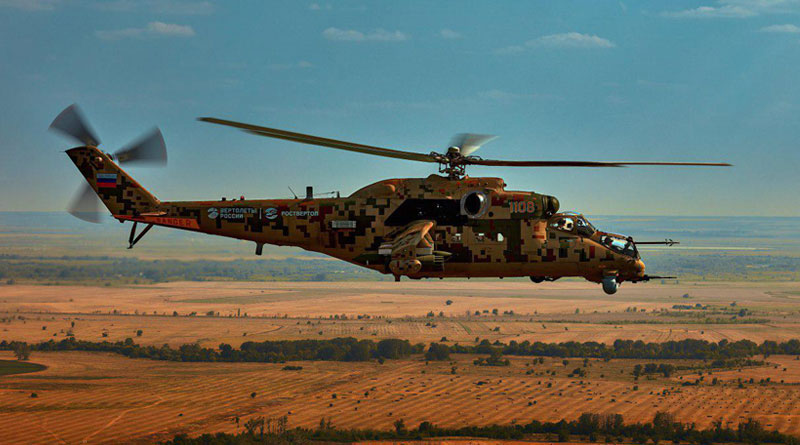 The holding company showcased a modernised Mi-35P, a corporate version of Ansat and a mobile service centre for overhaul of Mi-8/17 helicopters

Russian Helicopters holding company (part of Rostec State Corporation) took part in the Russia-Africa Economic Forum held in Sochi from 23 to 24 October 2019. In the ‘Industry’ zone, the holding company showcased a modernised Mi-35P attack helicopter, a corporate version of the civilian multipurpose Ansat helicopter and a mobile service centre for overhaul of Mi-8/17 helicopters.

“Over 900 helicopters made by Russian Helicopters’ enterprises are registered in African countries. This is almost one in four helicopters on the continent, and the share of our military rotorcraft is almost 40%. This certainly provides for huge potential for cooperation in servicing, modernising and renovating the fleet. We also offer our partners civilian helicopters, such as Ansat and Mi-171A2 multipurpose rotorcraft, and a military modernised Mi-35P attack helicopter. This is the evolution of the Mi-24/35 family which proved to be very effective in Africa,” said director general of Russian Helicopters holding company, Andrey Boginsky.

More than a half of helicopters in Africa made in the USSR and in Russia are machines of the world-famous Мi-8/17 family in various versions. To ease the maintenance of the fleet, the holding company offers container type mobile service centres. They are designed for overhaul of Mi-8/17 type helicopters and their versions at customers’ air bases. They may be deployed at any place even without using electricity: they have diesel generators. Such a mobile service centre is also presented at the exposition during the Russia-Africa Economic Forum.

Russian Helicopters’ civilian rotorcraft is also presented. Thus, the company presents Ansat multipurpose helicopter in its corporate version with a highly comfortable cabin. In Russia this twin-engine helicopter is actively operated as a “flying ambulance”. It has one of the largest cabins in its class and can be used for transporting cargo, passengers and medical supplies, search and rescue operations and patrolling. Ansat helicopter came onto the international market in 2018 at Airshow China, where Russian Helicopters signed a contract for delivering 20 helicopters of this type to the Chinese Emergency and Disaster Relief Association.