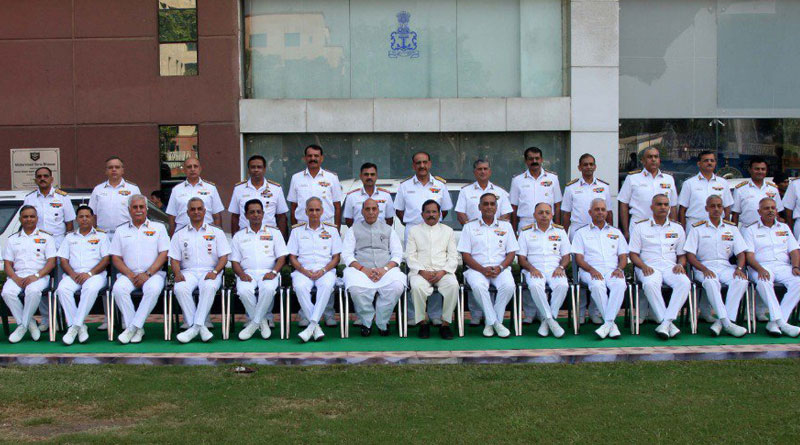 The Naval Commanders Conference saw deliberations issues like the artificial intelligence and big data, functional reorganisation of the Navy, among others

The second edition of bi-annual Naval Commanders’ Conference 2019 which commenced on 22 October 2019, concluded on 24 October 2019 after three days of extensive deliberations on the critical subjects the force is grappling with.

The defence minister Rajnath Singh addressed the Naval Commanders’ on 22 October 2019 and complimented all personnel of the Indian Navy for maintaining a high operational tempo and safeguarding India’s interest in the maritime domain. He congratulated the Navy for the swift and calibrated manner in which ‘Operation Sankalp’ was launched in the wake of incidents involving attacks on oil tankers in the Gulf of Oman in May and June this year, thus emphatically safeguarding Indian seafarers and the nation’s economic interests.

Rajnath Singh also acknowledged the expanding footprint whilst highlighting that the Indian Navy has continued to maintain a high level of operational readiness through regular deployment of ships, submarines and aircraft in our areas of interest. As the authority responsible for overall maritime security, which includes coastal security and offshore security, he also noted the concerted efforts undertaken by the Navy post 26/11 incident, including enhanced inter-agency cooperation and coordination, towards strengthening the security and stability of our waters and coastal regions. He appreciated the Navy’s efforts in the area of indigenisation, self-reliance and support to the ‘Make in India’ initiative of the government.

The defence minister stated that the Indian Navy has established itself as a vital tool for military diplomacy, furthering the national and foreign policy objectives through active cooperation and engagement with not just Indian Ocean Region nations, but maritime nations across the globe. Appreciating the Navy’s Foreign Cooperation initiatives and sustained efforts at capability enhancement and capacity building of Friendly Foreign Navies, he stated that these initiatives have not only strengthened maritime security and stability in the region, but have also resulted in transforming the Indian Navy into a ‘Preferred Partner’ for engagement in the Indian Ocean Region.

During his interaction with the Commanders’, the minister reviewed the combat readiness of the Navy, pace of modernisation and progress of various acquisition and infrastructure related cases. He urged the Naval Commanders to optimally utilise available resources to build a strong Navy that is ready and vigilant to counter any challenge that may emerge in the maritime domain.


In his opening address to the Commanders’, Chief of the Naval Staff Admiral Karambir Singh highlighted various important issues pertaining to operational readiness, capability enhancement, maintenance, op logistics, infrastructure development and human resource management. He also drew attention to overcoming critical capability voids, whilst highlighting the requirement of three Aircraft Carriers so that at least one operational carrier is available on either seaboard at any given time, amongst other capability gaps, especially in light of the increasing mandate of the Indian Navy in the IOR.

During deliberations, it emerged that the Indian Navy remains a well-balanced multi-dimensional force with modern surface, sub-surface and air assets, capable of blue water and littoral operations in the Indian Ocean Region and beyond to defend our national interests against potential threats. The present force levels are being augmented/ modernised for undertaking the full spectrum of roles and tasks defined for the IN. Further, IN is closely monitoring developments in our Areas of Interest, as also progressing our foreign cooperation mandated which is aimed towards outcome based interaction with other navies in the region in synch with the Hon’ble PM’s vision of SAGAR and Act East Policies. Based on the assessment of these developments, necessary steps are being initiated with the Government for strengthening the preparedness of Indian Navy.

The Commanders’ discussed numerous issues pertaining to Functional Re-organisation of the Indian Navy and Optimal Manning in order to improve Operational Efficiency. Issues pertaining to harnessing emerging Technologies as well as use of Artificial Intelligence and Big Data Analysis were discussed at length and key deliverables to be achieved in the desired time frame were identified. In addition to discussing Intra-IN issues, several critical subjects relating to effective conduct of operations in a futuristic Joint Service environment were examined and an action plan arrived at.

Chief of the Naval Staff exhorted the Commanders to maintain the highest state of operational preparedness to meet any eventuality that arises.