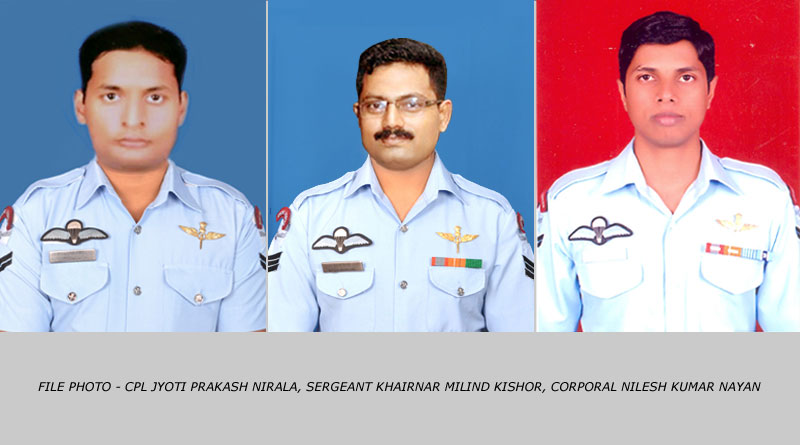 India remembered its martyrs on the 69th Republic Day as President Kovind conferred upon them gallantry awards posthumously.

On the 69th Republic Day, President Ram Nath Kovind mentioned the soldier who defends the Republic as one of the pillars of India. In his speech he said, “…we need to continue to modernise and strengthen our strategic manufacturing sector so as to provide the valiant personnel of our Armed Forces, and our police and paramilitary forces, the equipment that they need.” The President also posthumously conferred the Ashoka Chakra and two Shaurya Chakras to the bereaved families of Corporal Jyoti Prakash Nirala, Sergeant Khairnar Milind, and Corporal Nilesh Kumar Nayan respectively.

Indian Air Force Garud Commando, Corporal Jyoti Prakash Nirala, was conferred the Ashoka Chakra posthumously on the 69th Republic Day. He was a specialist weapon operator in the IAF Special Forces Detachment and was attached with the 13 Rashtriya Rifles Battalion, under the aegis of ‘Op Rakshak’ in Jammu & Kashmir for active counter insurgency operations. On 18 November 2017, an offensive was jointly launched by the Garud detachment and 13 Rashtriya Rifles in Chanderger village of Bandipora district. When six terrorists hiding in a house finally rushed out attacking them, Corporal Nirala gunned down a category ‘A’ terrorist, Ubaid Alias Osama Jungi (nephew of LeT commander Zaki Ur Rehman Lakhvi). He also managed to eliminate a category ‘A+’ terrorist, Mehmud Bhai (LeT North Kashmir commander) and injured two others. Critically injured in the violent gunfire that unfolded in retaliation, he continued the offence before succumbing to his injuries.

Sergeant Khairnar Milind Kishor deployed with Rashtriya Rifles for counter insurgency roles in the Bandipora district of Jammu and Kashmir was conferred the Shaurya Chakra posthumously by the President of India on the 69th Republic Day. Based on intelligence inputs about the presence of a group of terrorists, a cordon was laid on the night of 10 October 2017 for on the outskirts of Hajin village. On the morning of October 11, five to six heavily armed terrorists emerged from hiding and fired automatic weapons and grenades towards the position held by the late Sergeant. He was eventually hit by bullets and shrapnel but maintained precise fire and cut off the escape route of the terrorists. He shot down one terrorist and grievously injured another but was critically injured by the close quarter fight. He was evacuated to 92 Base Hospital where he ultimately succumbed to his injuries.

Corporal Nilesh Kumar Nayan was awarded the Shaurya Chakra posthumously by President Ram Nath Kovind. Like Sergeant Khairnar Milind Kishor, Corporal Nayan was also deployed with Rashtriya Rifles for counter insurgency roles in the Bandipora. He was in action in the inner cordon laid at night on October 10 along with his track leader. On the morning of October 11, five to six heavily armed terrorists emerged from hiding and grievously Corporal Nayan’s track leader. They turned their attention towards the Corporal and injured him. Corporal Nayan then killed one of the terrorists and injured another but suffered fatal bullet injuries before being martyred for India.