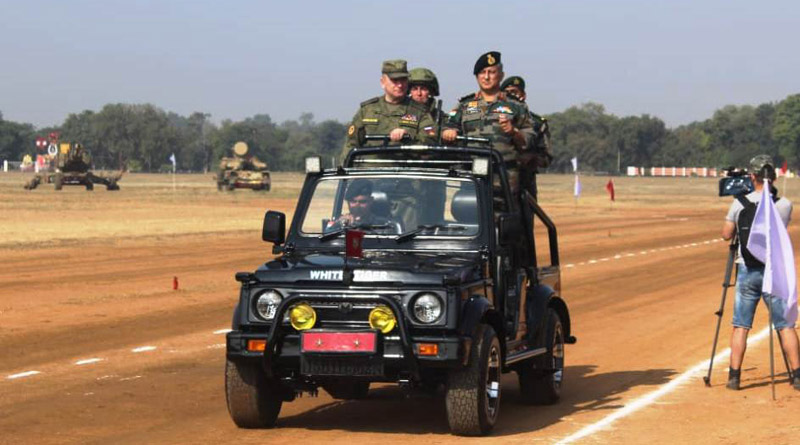 The first, Exercise INDRA 2018, the 10th iteration of the Indo-Russian joint exercise, commenced on 18 November 2018, with an opening ceremony for the same at the Babina Military Station, Jhansi. The exercise, scheduled from November 18 to November 28, is aimed at enhancing the interoperability of the two armies in peacekeeping and enforcement environments. At the commencement ceremony, there was a flypast of Army Aviation helicopters which carried the national flags of both the participating nations during the parade. The members of both the participating nations also interacted and familiarised with each other after the ceremony. Ex INDRA 2018 will witness participation from the Indian Army’s mechanised infantry battalion and motorised infantry units of the Russian Eastern Military District. The exercise will focus on special tactical operations, including cordon and search operations, house intervention, handling and neutralisation of IEDs (Improvised Explosive Devices), and integrated employment of force multipliers. The two countries have held this exercise every year since its inception in 2003. In last year’s exercise, the Indian contingent consisted of 350 personnel from the army, 80 from the air force, two IL-76 aircraft and one frigate and one corvette from the navy. The Russian contingent consisted of 1,000 troops from the 5th Army, marines, and ships of the Pacific Fleet and aircraft from the Eastern Military District. It was conducted at the 149th Combine Army Range Sergeevisky and in the Sea of Japan.


The second, a 12-day joint training exercise between India and the United States, is underway at the Mahajan Field Firing Ranges in Rajasthan. Special Forces from both armies will be participating in the exercise. It will include training on various aspects such as hostage rescue, desert survival, and combat firing. The American contingent consists of one officer and 10 other ranks from the United States Army’s Special Forces. The exercise is aimed at enhancing the interoperability of the two forces and further the military-military cooperation. The contingents will train on aspects such as hostage rescue, building intervention, desert survival, medical aid and combat firing. At the end of the joint training, the Special Forces will undertake a three-day outdoor exercise to validate their best practices.