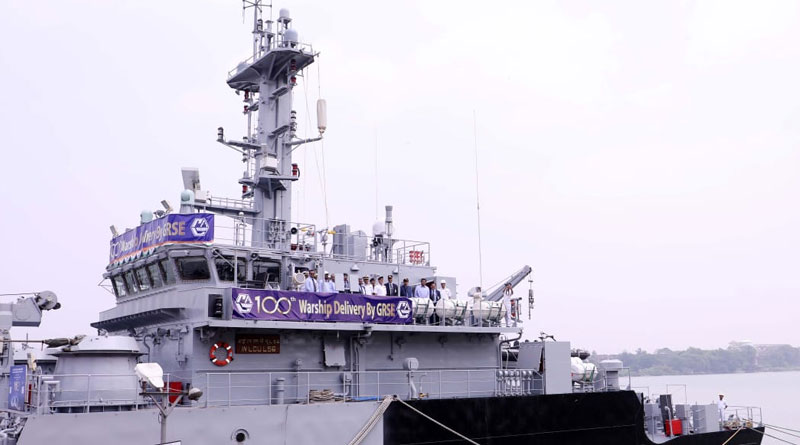 Garden Reach Ship Builders and En­gineers Ltd., (GRSE), a Miniratna Cat­egory 1 and a leading warship build­ing company in the country under the administrative control of the Ministry of Defence delivered its 100th warship to the Indian Navy on March 30. This makes GRSE the first Indian shipyard to make and deliver 100 warships to the Indian Navy, Indian Coast Guard and Mauritius Coast Guard.

What started in 1961 with the deliv­ery of Seaward Defence Boat (Mk-I) is seeing a splendid culmination with the delivery of the 100th ship – A Landing Craft Utility, L-56. The 99th warship – a Fast Patrol Vessel – was delivered to Indian Coast Guard on March 27.


The 100th warship, a Landing Craft Utility (LCU) named IN LCU L56 is the sixth of an order of eight such vessels from the Indian Navy. The entire de­sign of these LCU Mark IV ships has been developed in-house by GRSE as per requirements specified by Indi­an Navy. The construction of the bal­ance two ships is progressing as per the schedule. LCU Mk-IV ship is an amphibious ship with its primary role being transportation and deployment of Main Battle Tanks, armoured vehi­cles, troops and equipment from ship to shore. These ships based at the An­daman and Nicobar Command, can be deployed for multirole activities like beaching operations, search and res­cue, disaster relief operations, supply and replenishment and evacuation from distant islands.

Currently GRSE has a strong order book of Rs. 21,700 crore approximate­ly. equipping the shipyard with a deep pool of revenue-generating projects. 14 ships across 5 projects including 4 Nos. Survey Vessels (Large), won on competitive basis are presently under construction. GRSE has also been de­clared successful bidder in competitive bidding for another 8 ASWSWC ships for the Indian Navy.

GRSE’s association with the Indi­an Navy is long and strong as over the last six decades the shipyard has been building warships and other ves­sels for the country’s Navy and Coast Guard. With 100 warships successfully built, the shipyard already boasts of constructing highest number of war­ships in the country.