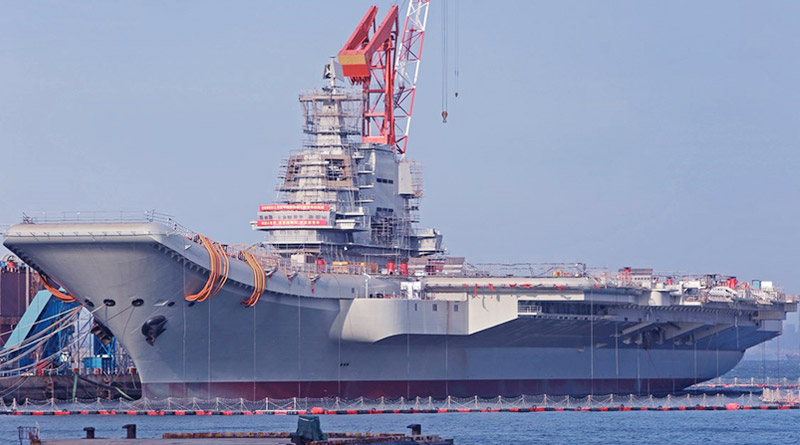 For many decades Indian Navy was the only operator of aircraft carriers in the region until the appearance of China’s Liaoning – a Type 001 aircraft carrier. Originally designed as the Kuznetsov-class aircraft cruiser Riga, the ship was renamed Varyag in 1990 and soon construction was stopped due to the break-up of the Soviet Union. Ukraine ultimately sold the half-completed hull to China in 1998.

25 September 2012, the Varyag was finished and commissioned by the People’s Liberation Army Navy (PLAN) as the Type 001 aircraft carrier ‘Liaoning’. Based on the knowledge gained by outfitting Liaoning, the PLAN started work on its second aircraft carrier Type 001A ‘Shandong’ in November 2013 at the Dalian Shipbuilding Industry Company (DSIC).

Based heavily on the Liaoning, the Shandong has a ski jump take-off and is expected to operate 24 Shenyang J-15 fighters (a reverse engineered version of the Sukhoi-33) along with a complement of helicopters. The aircraft carrier has a displacement of about 55,000 tonnes and is about 315 metres (1,033 ft) in length.


The Shandong’s first sea trials took place in May 2018 in the Bohai Sea to test vessel’s power and propulsion systems. Another round of sea trials were held in August. In October, the Shandong left its Dalian homeport for a third round of sea trials in the Yellow Sea, which may see it being put through further stress tests. The vessel may also test weapons and other systems.

Although actual aircraft take-off and landings are still far away from being realised, the Type 001A vessel has been spotted with mock-up models of the J-15 Shenyang on its deck, which indicates that the PLAN may have been conducting compatibility tests.

The Type 001A aircraft carrier is rumoured to be commissioned ahead on schedule on the 70th anniversary of the founding of the People’s Republic of China, which is on October 1, 2019. Shandong is expected to be operationally deployed in the PLA Navy’s North Sea Fleet or East Sea Fleet once it is commissioned.