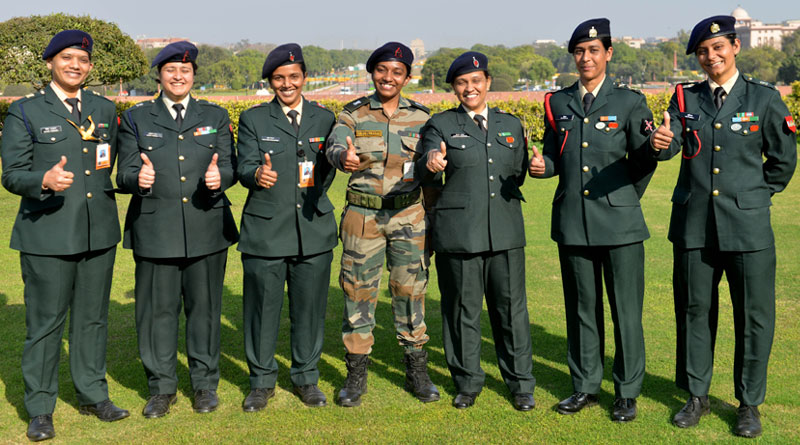 New Delhi: On the occasion of International Women’s Day celebrated on 8 March, the Indian Army arranged a media interaction with six of its women officers, at South Block in New Delhi.

Every woman officer present there said that she was happy to be a part of the organisation. They said that there was absolutely no discrimination made against them and that they were extended every opportunity as their male counterparts.

Major Aditi from Corps of Engineers who was commissioned in 2008 says that she was always presented with challenging opportunities as her male counterparts and was never made to take a step back just because she was a woman. “The Indian Army has given ne equal opportunities since the day I got commissioned. I have served shoulder to shoulder in high-altitude and desert areas and have never faced any inequality or gender bias,” Major Aditi says.

There is a popular belief that women staying with men in remote locations would be ‘unsafe’ for women. On this, Major Aditi adds, “The day I got commissioned, I was posted to Kargil and I did not face any issue staying there. I have also participated in field exercises with fellow men in desert areas but no discrimination was made.”

Major Monal Pashine from the Judge and Advocate General Department (JAG Dept) said that she feels proud to be a part of this organisation. ” It’s a privilege to be serving in the Army and I am proud to be a part of the Army. Honestly, the journey has not been that easy but then with the support of my family, the organisation and my counterparts I have completed 14 years of successful service.” She adds that women officers are treated as any other officer is treated and there is never any bias against them.

On what she thinks about motherhood being looked at as a ‘hassle’ while serving the forces, she says she doesn’t understand what that means. “I don’t see why motherhood is considered as a hassle for women officers. I am unaware why this feeling has crept in the society outside but no one in the Army has discriminated us based on this or other areas pertaining to womanhood.” When asked about postings in remote locations she says, ” Women are safe in the Indian Army and thanks to this environment and we are never made to feel insecure.”

On whether they feel women should be inducted into combat all the women officers present there said that with the kind of rigorous training that they are given, same as their male counterparts, the day for women to enter combat was not far. “The Army will extend its women officers this opportunity too,” most of them said.

In a landmark judgment on 17 February 2020, the Supreme Court ruled that women officers in the institution be given command positions at par with their male counterparts. The court also granted permanent commission and also entitlement to army pensions to women serving the army, irrespective of their duration in the service. The verdict was the result of female officer-litigants fighting for permanent commission in the Indian Army.

Further in July, the Defence Ministry’s Sanction Letter directed the government that women Army officers be granted permanent commission and command postings in all services except in combat units such as infantry and armoured corps.

As of February 2021, 6,807 women officers are a part of the Indian Army. As told by the government to the parliament, there was a threefold increase in women joining all the three armed forces in the past six years and the total today, stands at 9,118.