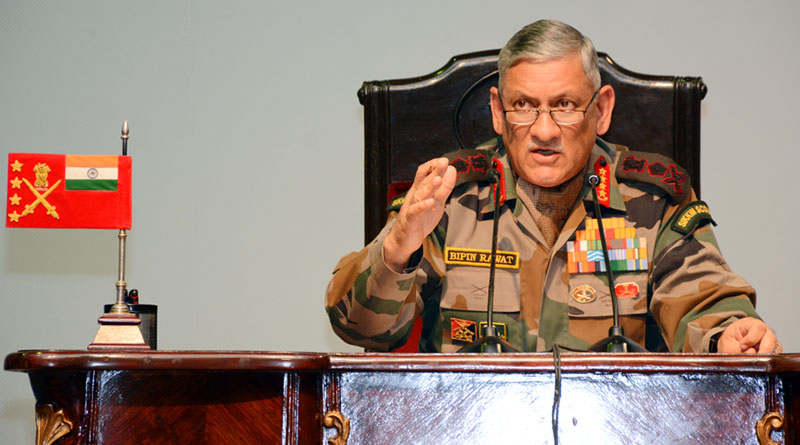 Chief of Army Staff General Bipin Rawat spoke assertively of the Indian Army’s capabilities in handling both China and Pakistan.

New Delhi: Speaking at the annual press conference in New Delhi, Chief of Army Staff General Bipin Rawat, said that China may be a powerful country but India is not a weak nation either. He admitted to security concerns posed by China’s People’s Liberation Army that “was exerting pressure” but reiterated the army’s preparedness and the fact that things are now different from 1962. “Yes we should try that it [tension with China] is not escalated,” General Rawat said. “We will not allow our territory to be intruded. We cannot allow our neighbours to drift away to China.”

“Doklam could have escalated but we were prepared. In this sector, the terrain favours us. Chinese troops continue to be deployed in North Doklam but numbers have now reduced. Tents and posts still remain…we have to be prepared,” he commented.


The chief was candid when it came to Pakistan, “We will call the nuclear bogey bluff. If we are tasked, we will cross the border and call it’s bluff. Ceasefire violations have increased as we are now targeting Pakistani posts that support infiltration. That’s why Pakistan keeps asking us to stop and maintain ceasefire.”

The terrorists trained and financed by Pakistan are disposable. Indian Army has ensured that Pakistan feels the pain of its soldiers. Stressing that quantity of ammunition is not the end all of war preparedness, he said that the army was focusing on bolstering its capacity to move ammunition from one sector to another.

The army is willing to lower General Staff Qualitative Requirement (GSQR) of weapon systems so that the indigenous defence industry gets a helping hand and India’s import burden subsequently reduces.

The battles of the future will involve “cyber and information warfare”, so the army is participating in upgrading its capabilities but it is a national endeavor, one that involves all national agencies.