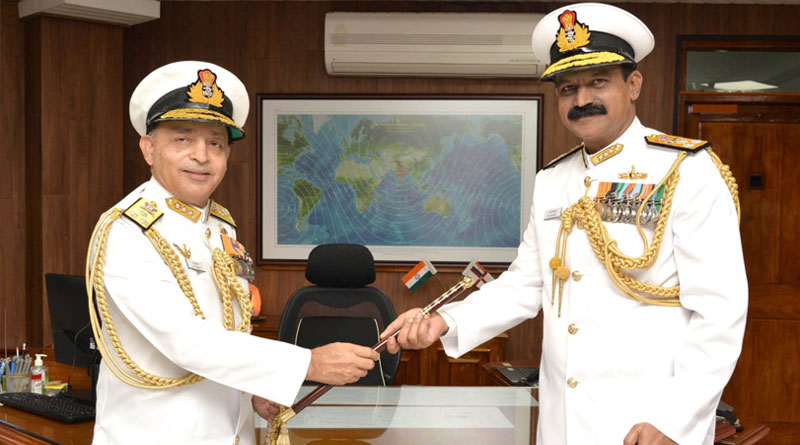 Vice Admiral M.A Hampiholi was the Commandant of the Indian Naval Academy, Kannur, Kerala prior to taking over this appointment. The Flag Officer, a native of Dharwad, Karnataka arrived in Kochi on 29 November 2021 for taking over the new assignment.

A ceremonial parade, consisting of 16 platoons including four armed platoons and a 50 men “Guard of Honour” was held at the naval base on the occasion, in which both the Admirals were accorded General Salutes and the parade concluded with a ‘March in Review Order’.

Subsequently, both the Flag Officers carried out the formal handing / taking over in the office of the Flag Officer Commanding-in-Chief. Speaking to the members of the media, prior to his departure, Vice Admiral A.K Chawla expressed satisfaction at the Command achieving its training goals in providing quality and trained manpower for the combat platforms. He also expressed happiness at the synergy achieved by the Command with the civil administration of the state in responding to different “Humanitarian Assistance and Disaster Relief (HADR)” requirements.

On completion of the handing over, Vice Admiral A.K Chawla was bid farewell by various Heads of Units, Commanding Officers, Chief Staff Officers, Officers, sailors, and defence civilians of the Headquarters, SNC. The traditional pulling out ceremony, by the senior officers, officers and men of the Southern Naval Command was also held after the media interaction. Admiral A.K Chawla was also presented a memento by the Office Bearers of Ernakulam Press Club on behalf of people of Kerala for supporting the State during challenging times.