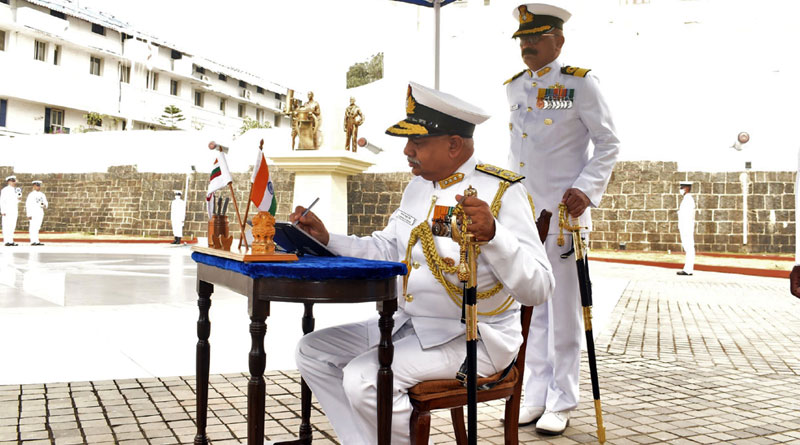 Vice Adm. A.B Singh also paid homage to all personnel who have made the supreme sacrifice in service to the Nation by placing a floral wreath at the Gaurav Stambh – Victory at Sea Memorial, at Naval Dockyard, Mumbai.

Commissioned into the Navy on 1 July 1983, Vice Admiral A.B Singh is a specialist in Navigation and Direction. An alumnus of UP Sainik School, Lucknow and the National Defence Academy, Khadakwasla. He received his first master’s degree from Madras University during the Staff Course at Defence Services Staff College, Wellington wherein he was also awarded the Scudder Medal. He also earned a master’s degree in Global Security from Cranfield University, United Kingdom in 2005.

A recipient of the Ati Vishist Seva Medal and Vishist Seva Medal, he has held several key operational, staff and training appointments in his naval career. He was the Navigating Officer of INS Kamorta (during Op Pawan) and destroyer INS Ranjit, besides being the Fleet Navigating Officer of the Western Fleet during Op Parakram. He has immense experience of serving at WNC in several appointments. All four of his operational commands have been of ships based at Mumbai Indian Naval Ships Veer (missile vessel), Vindhyagiri (frigate), Trishul (guided missile frigate) and Viraat (aircraft carrier). He has also been an instructor at the National Defence Academy at Pune and the Navigation and Direction School at Kochi and Directing Staff at Defence Services Staff College Wellington.

He was promoted to the rank of Rear Admiral in 2012 and served in the important staff appointment of Assistant Chief of Naval Staff (Policy & Plans) at Naval Headquarters. Thereafter, he has commanded the prestigious Eastern Fleet. On promotion to Vice Admiral in 2015, he served as Deputy Commander-in-Chief, Strategic Forces Command, the Chief of Staff of WNC at Mumbai and later as Deputy Chief of Integrated Defence Staff (Operations & Training) at the Integrated Defence Staff, New Delhi.