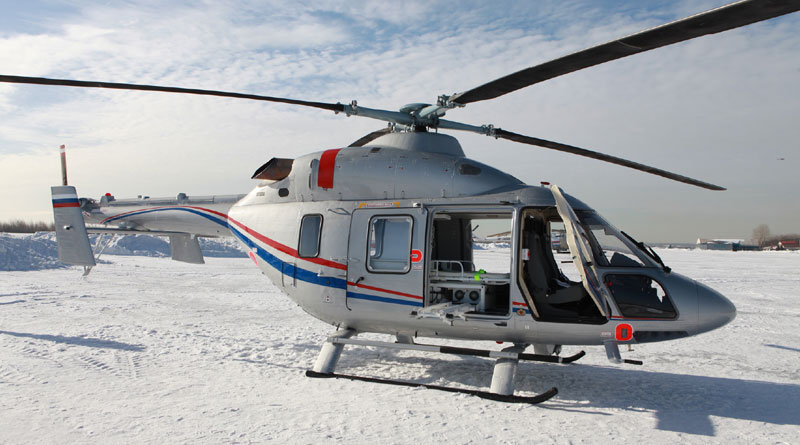 The Russian nuclear corporation Rosatom’s subsidiary, UMATEX, has received an export license and has sealed a number of contracts with as many as six Indian companies.

The company is manufacturing prepregs along with other stuff, used in Russian aviation projects such as the Ansat helicopter and MC-21 aircraft. The Kazan Ansat is a Russian light, multipurpose helicopter manufactured by Kazan Helicopters. It is built to a classic single-rotor design with a four blade main rotor and a two-blade tail rotor.

The composite materials based on carbon fibre are used in the airframe design of the multipurpose Ansat. In particular, they are used in the fabrication of the crew doors, cabin doors, transmission fairing, air exit grilles.

Some of the advantages of the composites: light weight, high strength, high corrosion resistance, durability and the potential to make the so-called smart products. Composites help to pre-configure various properties in certain structural units, for instance high strength in structures subjected to loads and offer the benefit of streamlining the production process and help make a structure lighter than similar items made of steel. This further leads to fuel efficiency, reduced CO2 emissions and enhanced structural durability.

Airframe components of the Ansat helicopter are made using АСМ102 С200Т prepregs (resin-impregnated fabrics) produced by Prepreg-ACM JSC. These prepregs are based on АСМ С200Т technical fabrics produced by Prepreg-Dubna LLC using UMT42S-3K-EP carbon fibre produced by Alabuga-Fibre LLC. “Successful cooperation of the companies within our Division makes it possible to manufacture high-quality competitive products that become part of various commodities (for instance, the Ansat helicopter) — both on the Russian and international markets”, says UMATEX’s Deputy Director General Dmitry Kogan.

In May 2020, the first Ansat helicopter made in Russia arrived in Mexico to carry out aviation operations for 3 years. Earlier, in February 2020, People’s Republic of China’s aviation authorities validated the Ansat certification and thus endorsed supplies of these helicopters to China to be used by local operators.

According to its certificate, the helicopter’s design allows its prompt conversion into a cargo aircraft or a passenger machine hosting up to 7 persons. In May 2015, an addition to the type certificate was awarded for the helicopter modification with a medevac module. The Ansat is certified to be used within the temperature range of -45 to +500C, as well as for operations in high-mountain regions.

The UMATEX/Rosatom companies also include the production of fabrics and prepregs — Prepreg-ACM and Prepreg-Dubna in the Moscow Region, sports gear producer Zaryad in Tatarstan, two trading houses in the Czech Republic and China. The R&D Centre in Moscow is geared up with state-of-the-art equipment to advance PAN precursor and carbon fibre technology, resins and prepregs.

To promote the composites market, the Division has given rise to an interregional industrial cluster called Composites without Borders in the Republic of Tatarstan, Moscow and Saratov Regions. Tula and Ulyanovsk Regions will also join the cluster by the end of 2020.