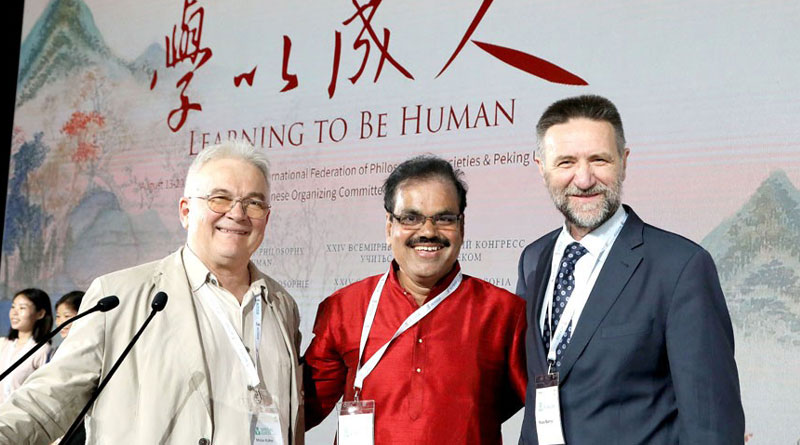 It is crucial for China and India, the world’s two largest emerging economies, to optimize think tank exchange and ensure timely communication between “masterminds” of the two nations.

Chinese President Xi Jinping proclaimed in his speech at the opening ceremony of the first Belt and Road Forum for International Cooperation that “friendship, which is fueled by close contact between people, is key to sound state-to-state relations.” In May 2015 when Indian Prime Minister Narendra Modi visited China, leaders of the two countries reached important consensus on organizing the China-India Think Tank Forum. Thanks to the joint efforts from the Chinese Academy of Social Sciences and the Indian Ministry of External Affairs, the first China-India Think Tank Forum was held in New Delhi in 2016. Already, it has become a regular communication mechanism and an integral carrier of cultural exchange between China and India.

As key representatives of developing countries, China and India have also hosted the fastest-growing major emerging economies in recent years. Many have dubbed the 19th century the “European Century,” the 20th century the “American Century” and the 21st century the “Asian Century.” China and India are the two main pillars bolstering the revival of Asia. Consequently, the two countries shoulder the main responsibility of leading the development of emerging economies and share a multitude of common interests. They have reached consensus to safeguard the current international order and push it to become fairer and more rational. They also hold identical or similar stances on many international and regional issues. There is no reason China and India should not carry out close cooperation in making new historic contributions to people of developing countries in Asia, Africa and Latin America.

China-India cooperation should not only focus on forging strategic mutual trust, but also pay attention to practical outcomes. Based on actual conditions, the two sides need to continuously seek new growth points for cooperation and inject new vitality into bilateral relations. The biggest highlight of bilateral ties is economic and trade cooperation, which is also a key growth point for their relationship. Trade volume between China and India grew from US$2.9 billion in 2000 to US$84.4 billion in 2017. Against a backdrop of sluggish global economic growth and rising protectionism, China and India have set a good example for the world’s major economies to maintain and solidify economic connection. In 2017, trade volume between the two countries increased by 20 percent year-on-year, the biggest growth rate over the past five years. Presently, China is India’s largest import source and fourth largest export market. Meanwhile, India has also occupied an increasingly important position in China’s foreign trade landscape and is expected to rank among the top 10 trading partners of China. This testifies to the necessity and importance of strengthening trade cooperation between China and India.

In addition to tapping potential in economic and trade cooperation, China and India also need to jointly explore the international market, especially markets of developing countries. Moreover, Chinese and Indian enterprises greatly complement each other and should work together to explore markets in regions like Southeast Asia, South Asia and Africa through mutually beneficial cooperation. By so doing, the two countries will not only create opportunities for their own development, but also inject momentum into the modernization of developing countries.

Human society is entering an era of great development, reform and adjustment. Alongside increasing world multi-polarity, economic globalization, social informatization and cultural diversification, peaceful development remains a robust trend, and mankind has been constantly accelerating the pace of reform and innovation. Countries have never been closer, people around the world have never been hungrier for a better life, and human beings have never before enjoyed such diverse methods to overcome difficulties.

However, we need come to terms with the fact that today’s world is full with challenges. Global economic growth requires new drivers, development needs to be more inclusive and balanced, and the wealth gap should be narrowed. Some regions are still plagued by instability, and terrorism remains a prevalent threat. Deficits in peace, development and governance pose severe challenges to mankind.

China and India need to work together to address such challenges. The Chinese highly commend the remarkable achievements India has made in promoting its economic development and social progress and admire the foresightedness and pragmatism of Prime Minister Narendra Modi. In the process of realizing the Chinese Dream of national rejuvenation, China is open to marching forward shoulder-to-shoulder with India, a country embracing a similar dream of national revival. In this multipolar world, China supports the idea of both countries speaking on behalf of developing countries on the international stage with their wisdom as ancient civilizations.

The ancient Silk Road crossed areas along the Nile, Tigris, Euphrates, Indus, Ganges, Yellow and Yangtze rivers, nourished ancient Egyptian, Babylonian, Indian and Chinese civilizations, and traversed habitats of people from different countries and races with diverse religious beliefs such as Buddhism, Christianity and Islam. Over millennia, the ancient trade route that extended thousands of miles fostered the Silk Road Spirit characterized by “peace and cooperation, openness and inclusivity, mutual learning and mutual benefit.” A precious legacy of human civilization, it provides a significant solution and guideline for addressing new challenges faced by economic globalization in the 21st century.

Think tanks are an integral part of the soft power of a modern country. They have great value in the national governance system and play a crucial role in promoting public diplomacy and mutual learning between different civilizations. It is particularly crucial for China and India—the world’s two major emerging economies—to build a think tank exchange and cooperation mechanism from the governmental perspective, strengthen state-to-state cultural exchange and achieve timely communication between “masterminds” of the two nations.

Think tank exchange between China and India should set its sights not only on communication on international and regional issues concerning respective national interests to coordinate foreign policy of the world’s two biggest developing countries, but also commit to effectively discussing and controlling old and new problems concerning bilateral ties to make greater contributions to stabilizing their relationship. More importantly, Chinese and Indian think tanks need to spread effective methods and ideas on accelerating economic development and improving governance and people’s livelihood in each other’s countries that have been learned through research. Such concepts must be distributed to domestic government departments and personnel in a timely manner to help solve similar problems plaguing both countries.

Both China and India have fostered many think tanks. As China’s highest academic institution and comprehensive research center of philosophy and social sciences, the Chinese Academy of Social Sciences is enthusiastic about leveraging its research capacity and its influence on the Chinese government and public to carry out policy and pioneering research with its Indian counterparts on an equal footing. This research should focus on facilitating policy coordination and people-to-people communication between China and India, providing intellectual support for the two countries to realize their respective dreams and creating a favorable atmosphere for mutual understanding, trust and cooperation between the two nations.

The author is a member and vice president of the Chinese Academy of Social Sciences.