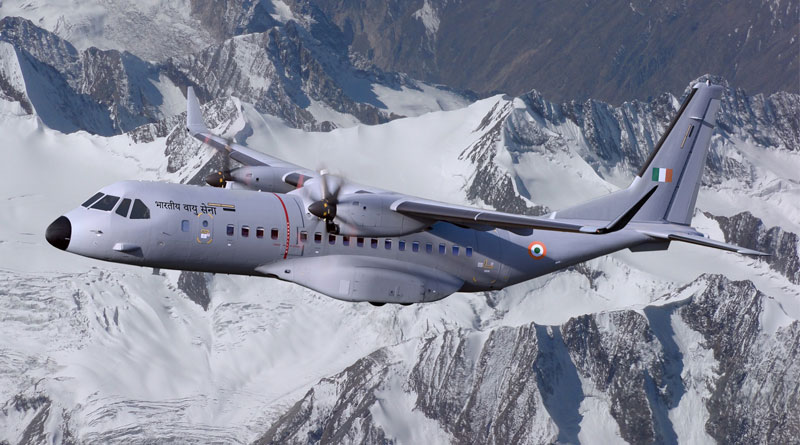 The Prime Minister of India, Narendra Modi, laid the foundation stone of the Final Assembly Line (FAL) for Tata Group’s India C295 Programme at Vadodara, Gujarat. The unit will undertake aircraft manufacturing and assembly and will deliver a mission-ready aircraft in transport configuration, equipped with an indigenous Electronic Warfare Suite to the Indian Air Force (IAF).

In September 2021, India formalised the acquisition of 56 Airbus C295 aircraft to replace the Indian Air Force (IAF) legacy AVRO fleet. It is the first ‘Make in India’ aerospace programme in the private sector, involving the development of a complete industrial ecosystem—from manufacture to assembly, test and qualification, to delivery and maintenance of the complete lifecycle of the aircraft.

This will be the first time in the Indian private sector that an aircraft will be manufactured in-country, from parts to final assembly. The programme will lead to the development of a strong private industrial aerospace ecosystem in India and will create more than 15,000 skilled direct and indirect jobs across the aerospace eco-system, with more than 125 suppliers qualified on global quality standards across India.

Speaking during the laying of the foundation stone, Chairman, Tata Sons, N Chandrasekaran said, “With the set-up of the Final Assembly Line (FAL) in Vadodara, the Tata Group will now be able to take aluminum ingots at one end of the value stream and turn it into an Airbus C295 aircraft for the Indian Air Force. This is a historic moment not only for the Tata Group but for the country, as it embraces the Hon’ble Prime Minister’s vision of being truly ‘Atmanirbhar’”.

“We are honoured to play a role in this historic moment for aerospace in India. Our Airbus teams are committed to supporting the modernisation of the Indian Air Force with the C295 programme, which will also contribute to the development of the private defence manufacturing sector in the country,” said Airbus Chief Executive Officer, Guillaume Faury. “The C295 programme, in partnership with the trusted Tata Group, is strongly aligned with the Government of India’s vision of an ‘Atmanirbhar Bharat’ (self-reliant India).”

The IAF became the 35th C295 operator worldwide. Up to date the programme counts 285 orders, with more than 200 aircraft delivered, 38 operators from 34 countries as well as 17 repeated orders. In 2021 the C295 achieved more than half a million flight-hours.

With a proven capability of operating from short or unprepared airstrips, the C295 is used for tactical transport of up to 71 troops or 50 paratroopers, and for logistic operations to locations that are not accessible to current heavier aircraft. It can airdrop paratroops and loads and can also be used for casualty or medical evacuation. The aircraft can perform special missions as well as disaster response and maritime patrol duties.