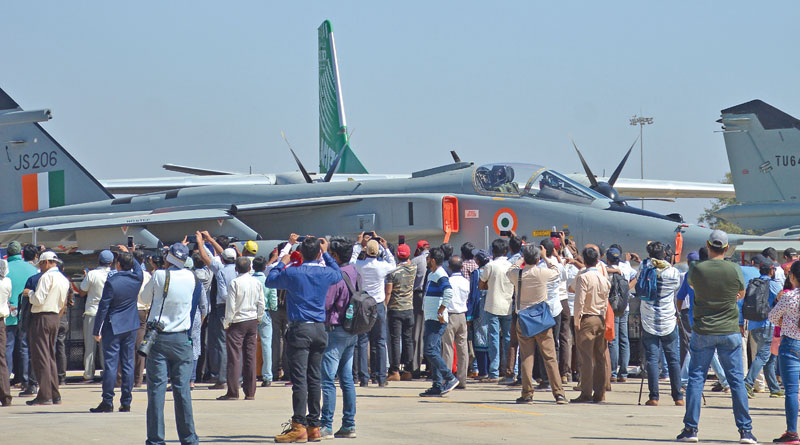 Yelahanka, Bengaluru: Amid the uncertainty that the past year brought in, coupled with major global events being cancelled (including the biggest air show held in Paris), speculations were rife that something similar would happen with the biennial Aero India show to be held in Bengaluru in February 2021. On the contrary, the decision to hold this show physically came much before the vaccines.

One week ahead of the show, Aero India already has 589 exhibitors. As it suits the current mood, the maximum number of companies participating in the airshow are Indian, with 511 companies. The number is fast increasing, as per details on the Aero India website. Uttar Pradesh Defence Industrial Corridor consortium, which has attracted investments to the tune of Rs 3,000 crore, will be seen at the show.

So far 78 foreign companies from 14 countries have registered for the show. This number is fast rising. For instance, the second largest exhibitor country after India is France. As early as in November, French companies registered in large numbers. The third largest is the US in terms of participants. This show will be different from the previous ones because of its hybrid nature—here delegates have been given an option to be present either physically or virtually.


With Indian defence industry’s aspirations for exports, India will have an array of products on display. HAL-developed Light Utility Helicopter (LUH), a weaponised Advanced Light Helicopter (ALH) and a Light Combat Helicopter (LCH) will be displayed at the show.

Well-known companies such as Lockheed Martin (LM) will be showcasing a diverse portfolio of defence capabilities. The aerospace giant will exhibit the F-21 aircraft, MH-60R ‘Romeo’ along with the S-76 D helicopter. The C-130J Super Hercules will also be part of LM’s display during the show. The US-based company is engaged with the Indian armed forces in a number of projects. A total of 24 MH-60R Romeos, in a deal that was sealed for USD2.6 billion, are on order with Sikorsky, a LM company, for the Indian Navy. For the navy’s Naval Utility Helicopter programme, Sikorsky has pitched the S-76D helicopter.

Boeing, which currently has maximum projects in India, will be exhibiting a range of advanced capabilities such as F/A-18 Block III Super Hornet, F-15EX, KC-46 Tanker, AH-64E Apache, P-8I, 737-10 and the 787-9 Dreamliner. The F/A-18 Block III Super Hornet is one of the finalists against the French Rafale in the contest for India’s carrier-based fighter jets to be procured for the navy. Boeing launched the F/A-18 Super Hornet Block III from a ski-jump ramp successfully. Under works with Boeing currently is the Indian Army’s order for 28 AH-64E. Only last year it finished the delivery of 22 Apaches and 15 Chinooks to the Indian Air Force (IAF). Boeing has pitched its F-15EX for IAF’s Multirole Fighter Aircraft (MRFA) programme. Dassault Aviation, which has pitched its Rafale Marine to the navy against the Super Hornet, will be at the show.

French company Thales will showcase its airborne optronic capability. On show will be TALIOS, which  combines targeting and tactical reconnaissance capabilities in a single pod, will be able to embed Artificial Intelligence in the future. Also, Thales will showcase a range of rockets for fixed and rotary wing military aircraft.

Airbus will showcase the C295-medium transport aircraft with a digital display of the A330 Multi-Role Tanker Transport (MRTT) aircraft along with other aircraft. In helicopters, the French company will showcase models of the H225M and AS565MBe Panther. The company had pitched two aircraft for the NUH programme, which included the latter, Panther AS565MBe and H135M.

Even as Aero India sees major players participating and hopes are up that the usual flavour of the event will be retained, the fact is that the response from global industries continues to be low. This year the response from global players is less than half from the last time. More than 600 Indian companies and 200 foreign companies had participated and witnessed the largest Air show of Asia in the 2019 edition.

Air Officer Commanding, Air Force Station, Yelahanka, Air Commodore Shailendra Sood had recently informed that during the show, there will be combined air display of Sarang and Surya Kiran Aerobatic Team (SKAT). In other news, he also said that 2,500 hospital beds and four aircraft had been kept on standby for medical emergencies.