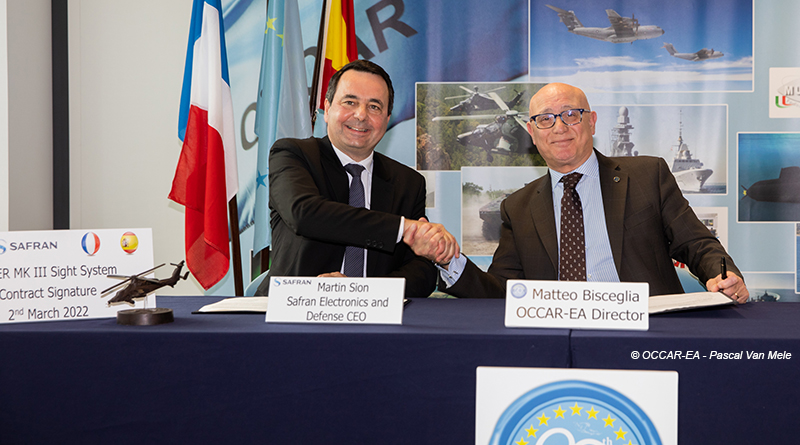 With the Tiger attack helicopter scheduled for a mid-life upgrade, Safran Electronics & Defence has won a contract to supply 85 Euroflir 510 optronic (electro-optical) sights from the Organisation for Joint Armament Cooperation (OCCAR), on behalf of the French and Spanish defense procurement agencies. This gyro-stabilized optronic system, successor to the Strix sight, will be used on Tiger Mk3 helicopters deployed by French and Spanish armed forces.

The Euroflir 510 is a key part of the Tiger Mk 3’s weapon system. Mounted over the cockpit, it will give the crew unrivaled observation performance, including in a degraded visual environment (DVE), `to ensure threat identification capabilities both day and night. Designed for easy integration on the Tiger, the Euroflir 510 supports all of the helicopter’s weapons, including guns, laser-guided air-to-ground missiles, air-to-air missiles and rockets offering accuracy to within a meter.

This optronic system combines 12 sensors with a multispectral telescope featuring a very long focal length and ultra-high-performance line-of-sight stabilization. It offers several observation channels to cover all bandwidths from visible to infrared, four types of lasers and integrated “see spot” technology. With all these sensors and powerful built-in image processing, the Euroflir 510 reflects the fast-paced progress in onboard displays by supplying full-resolution digital video streams to reduce operators’ cognitive workload during multiple demanding missions.

Through this latest success, Safran confirms its European technological leadership in the very demanding market segment of optronic equipment for attack helicopters. Safran develops and produces the Euroflir 510 in France and will call on several different facilities to handle the initial deliveries, planned for 2027.