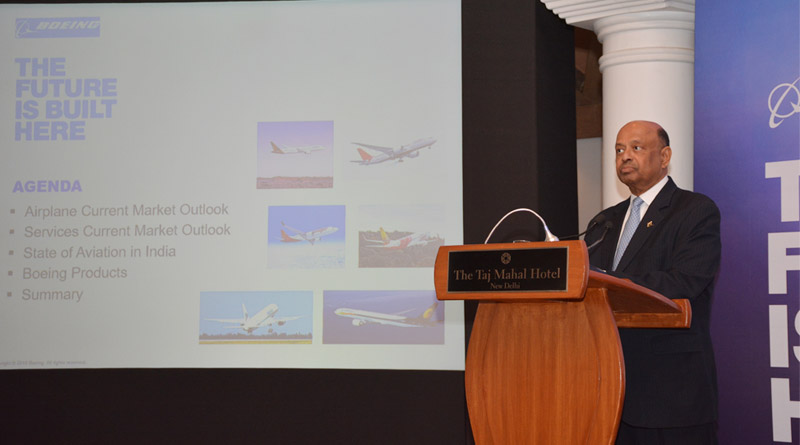 On account of unprecedented domestic passenger traffic and rapidly expanding low-cost carriers (LCCs), Boeing presented a promising outlook for commercial airplanes in India, anticipating the need for 2,300 new jets – valued at $320 billion – over the next 20 years.

This year alone, more than 10 million passengers, on average, travelled within India each month. The company said South Asia will be leading the world in traffic growth at 7.8% during the next 20 years.

Addressing a press conference, Dinesh Keskar, senior vice president of sales for Asia Pacific and India, Boeing Commercial Airplanes, said, “To meet this increased domestic air traffic growth, we see the vast majority of available airplane seats coming from LCCs. The success of this market segment will mean more than 80 percent of all new airplane deliveries in India will be single-aisles. And the superior economics and fuel efficiency of the new 737 MAX airplane will be the perfect choice for Indian carriers.”


According to Boeing’s Commercial Market Outlook (CMO), India’s commercial aviation industry has achieved 51 consecutive months of double-digit growth. This growth is matched in other sectors of the country’s economy.

“The Indian economy is projected to grow by nearly 350 percent over the next two decades to become the third largest economy in the world,” said Dinesh Keskar, senior vice president of sales for Asia Pacific and India, Boeing Commercial Airplanes. “This will continue to drive the growth of India’s middle class and its propensity to travel both domestically and internationally, resulting in the need for more new fuel-efficient short and long-haul airplanes.”

The LCCs now provide about 64% of all seats in India, on the back of growing per capita income and continuous low costs in the country. However, Keskar said the rising ATF prices, which have risen by 60% since the mid-2016 coupled with rising dollar rates, were adding to the stress of the airlines. Notwithstanding, domestic travel continues to register a stellar growth in the country.

He said the government of India was expanding airport operations, enhancing infrastructure and creating a conducive environment for the passenger traffic to grow significantly. The modernisation and addition of more and more airports was also giving a boost to the increasing traffic, which he said is a good sign for the future of the industry. The company, however, said it doesn’t expect much demand to come from the regional routes on account of a variety of reasons.

With more than five percent of the world’s fleet expected to operate in India by 2037, services will continue to be a major driver of growth in the region’s commercial aviation industry. Commercial services such as flight training, engineering and maintenance, digital analytics among others will provide airlines with optimal operational efficiencies as they continue to expand to meet growth in the marketplace. In the South Asian market, including India, Boeing forecasts a commercial services market valued at $430 billion over the next 20 years.