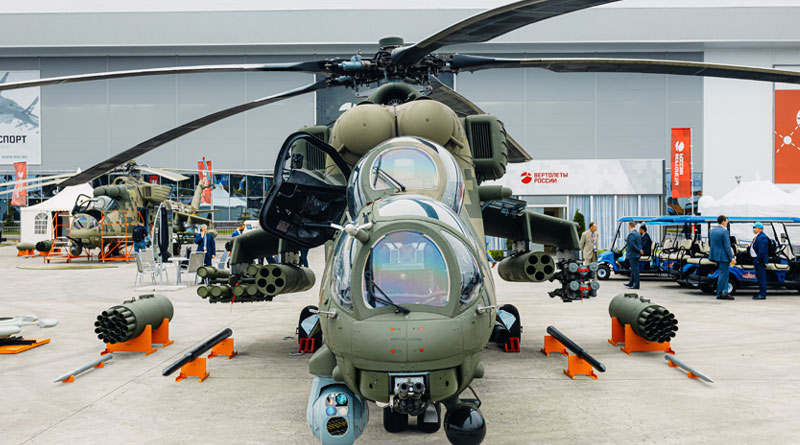 In front of ‘Pavilion A’, at the static display, Russian Helicopters will present attack helicopter Mi-28NE, as well as transport-combat Mi-35M and Mi-35P.

These aircraft are loaded with a wide range of guided and unguided missiles, and the most up-to-date avionics allow them to carry out missions at any time of the day or night. Also, in the ‘Patriot’ park, there will be an upgraded military transport helicopter Mi-171Sh. It is characterized by increased protection of the crew and troops through its kevlar armor plates.

The helicopter will also have an expanded armament to effectively support the paratroopers from the air.

Another aircraft presented at the static display will be a light helicopter Ka-226T in a new design, adapted to meet the high mountain requirements. The helicopter&#39;s fuselage ​is made with the use of modern lightweight materials, the control and the electrical helicopter systems have been modernized, an impact-resistant crashproof fuel system has been installed, which meets the increased safety requirements. At the same time, the volume of fuel tanks has been increased because of centralized refuelling support. The helicopter is also equipped with a new complex of pilot navigation and radio communication equipment.

Besides, for the first time, an unmanned aircraft BAS-200 will be presented at the ‘Army’ forum and placed in the aviation exposition area at ‘Kubinka’ airfield. The maximum take-off weight of the device is 200 kilograms. It can reach speed up to 160 km/hour and can transport commercial load up to 50 kilograms. The BAS-200 can fly up to 4 hours at altitudes of up to 3,900 meters. There also presents a ground control complex to provide communication with the drone at a range of up to 100 kilometres. The device is 3.9 meters long and 1.2 meters high. The BAS-200 project is being developed by the National Helicopter Center &quot;Mil &amp; Kamov&quot; of &quot;Russian Helicopters&quot; Holding Company.

As part of the holding&#39;s exposition at the Kubinka airfield, the world&#39;s largest serial helicopter, the modernized Mi-26T2B, as well as transport-paratroopers Mi-38T and civil Ansat Aurus helicopter, will also be presented.

At the demo centre of Rostec State Corporation, the holding will present the latest onboard equipment for Russian helicopters. Guests and participants will be able to view the perspective helicopter ergonomic cabin, as well as Ansat helicopter main power elements technical condition control system.