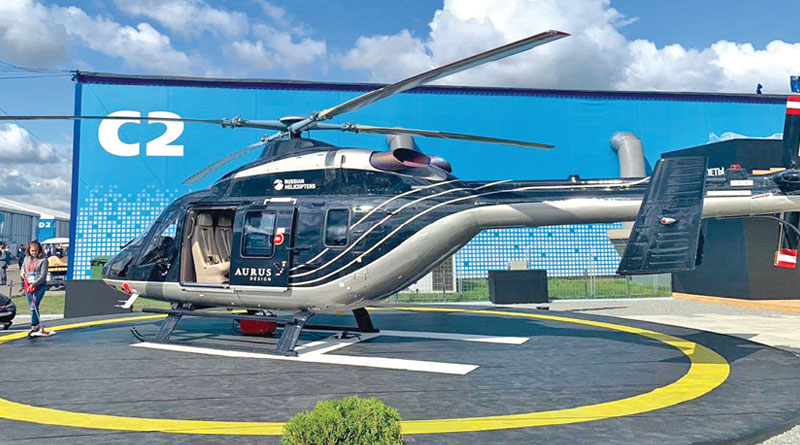 The civil products consisted of medium-sized multi-purpose Ka-62, the first serial Mi-38 helicopter, and a light-weight Ansat, whose VIP cabin is designed in the Aurus brand style, were presented for the first time.

The Ka-62 medium-sized multi-purpose helicopter was presented as part of the static exposition, and also took part in the fly-by of the entire line of the Russian Helicopters rotorcraft and performed individual aerobatics. A distinctive feature of the helicopter is its single-rotor scheme with a multi-blade anti-torque rotor in the annular channel of the vertical tail fin, which was for the first time used on helicopters in Russia. The Ka-62 construction widely applies polymer composite materials.

MAKS-2019 also saw a debut of the serial civilian Mi-38 helicopter featuring a superior comfort cabin. The ‘VIP cabin’ version of Mi-38 can take up to 11 passengers on board, while the basic passenger version can carry up to 30 people. The flight range of the new helicopter is up to 1200 kilometres.


“Mikhail Leontyevich Mil used to say that our country was seemingly created especially for helicopters. It is noteworthy that in the year of the 110th anniversary of his birth, we present a novelty by the design bureau that bears his name, that is, the first serial Mi-38 helicopter. Of equal importance to this event is our Kamov premiere, Ka-62, which is being demonstrated at the air show for the first time, including the flight programme,” noted director general, Russian Helicopters, Andrey Boginsky.

Also part of the portfolio was the Ansat helicopter with a highly comfortable cabin in Aurus brand style for the first time. The cabin has been designed by specialists of Russian Helicopters and NAMI (Central Scientific Research Automobile and Automotive Engines Institute).

“Aurus is a premium brand which is becoming Russia’s signature. Now it includes both cars and aircraft of the same style that is as comfortable as cars. It is no wonder that Ansat has been chosen as a base: this is a state-of-the-art helicopter whose advantages have already been appreciated both in Russia and abroad,” said aviation cluster industrial director of the Rostec State Corporation, Anatoliy Serdyukov.

CEO of NAMI Sergey Gaysin commented, “At the suggestion of Russian Helicopters, NAMI specialists eagerly began to work on the luxury version of the Ansat helicopter. The expertise of Russian specialists in engineering, design and marketing gained when Aurus car was created allowed us to make a product meeting the highest international standards within a short time frame. Collaboration with Russian Helicopters holding company is the first step to so expand the Aurus brand that it makes not only cars.”

A convertible Mi-171A2 helicopter was also showcased at the show. Depending on the customer wishes, the helicopter can be used for cargo transportation, as well as to transport up to 20 passengers. This is the first certified rotorcraft of the Mi-8/171 family in a convertible version.

On the side-lines of the show, Russian Helicopters, Gazprombank Leasing and Norilsk Avia (part of Norilsk Nickel group) signed a contract to supply 10 multipurpose Mi-8AMT helicopters.

The helicopters are to be built at the Ulan-Ude Aviation Plant, which is part of Russian Helicopters Holding Company. The rotorcrafts are scheduled for delivery in 2020-2024.

“It’s the first time that we signed a lease agreement with Gazprombank Leasing, and we are very excited about it. We look forward to a long and fruitful cooperation,” noted director general of Russian Helicopters Holding Company Andrey Boginsky.

“We are pleased to contribute to the development of transport infrastructure of the country and, in particular, the establishment of helicopter service in remote areas, where other forms of transportation proved to be unprofitable. I am sure that the Russian Helicopters’ machines, which are well proven in the harsh operating conditions, will significantly improve the quality of passenger service,” said deputy chairman of the Gazprombank Management Board, Alexey Belous.

“Norilsk Avia is the only helicopter company on the Taimyr Peninsula that is able to meet the region’s needs in aviation services. Today, the carrier operates helicopters of the Mi-8 type, which not only provide transportation for production needs of the company, but are used for rapid response to emergencies, and perform an important social function providing sanitary flights and passenger transportation of the Far North natives to remote settlements,” said Norilsk nickel state secretary and vice-president, Dmitry Pristanskov.

Russian Helicopters also signed dealership agreements on promotion and sales of the light multipurpose helicopter VRT500 with a Malaysian company Ludev Aviation. It is planned to start the supplies in 2023.