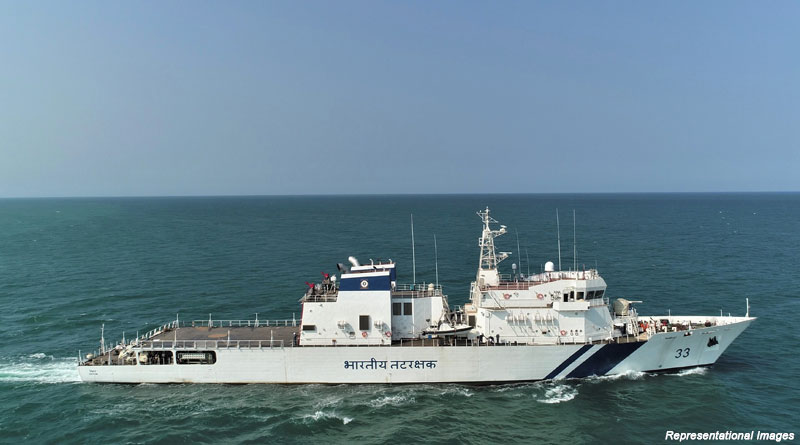 Larsen & Toubro (L&T) has launched the fifth Offshore Patrol Vessel (OPV) for the Indian Coast Guard at its Kattupalli Defence Shipyard, the engineering giant said in a statement on September 5. This is the 60th defence vessel built and launched by L&T for Ministry of Defence, till date.

The vessel was launched at the hands of IA & AS, Secretary (Defence Finance), Ministry of Defence, Gargi Kaul, in presence of Additional Director General KR Nautiyal, PTM, TM, Coast Guard Commander Eastern Seaboard of Indian Coast Guard and other dignitaries.

Larsen & Toubro is executing a ministry of defence contract for design and construction of seven OPVs with deliveries mandated between 2018 and 2021. The shipyard delivered three OPVs ICGS Vikram, ICGS Vijaya and ICGS Veera, which had been commissioned in the Indian Coast Guard during the financial year 2018-19, ahead of schedule. Fourth OPV ICGS Varaha is currently undergoing sea trials and will be delivered in coming weeks.


“L&T’s modern Greenfield shipyard at Kattupalli is capable of undertaking simultaneous construction and refits of multiple ships and submarines. With in-house design and engineering, L&T has so far delivered Floating Dock (FDN2) to the Indian Navy, a first of its kind in India, 03 OPVs and 46 Interceptor Boats to the Indian Coast Guard. It is a unique track record in Indian defence shipbuilding that all the four contracts that MoD placed on L&T till date have realised deliveries ahead of contractual schedules, highlighting L&T’s distinctive performance in defence shipbuilding,” L&T said.

Commenting on the launch, CEO & managing director, Larsen & Toubro, S.N. Subrahmanyan, said: “It gives me immense satisfaction to witness L&T’s growing contribution to strengthen the nation’s fleet of defence ships. The launch of L&T’s 60th defence vessel today and commissioning of 50th ship into the Nation’s service within a short span of 9 years of defence shipbuilding operations bear testimony to our commitment towards ‘Make in India’.”

“Consistent excellence in performance with early deliveries and recent accreditation of Five Star grading by the British Safety Council to Kattupalli shipyard (gaining the distinction to be the fourth shipyard to attain this feat globally) exemplify our shipbuilding capabilities and people practices that are at par with the Global Best. Implementation of Industry 4.0 practices has assured quality, speed, safety and modularity in warship construction,” said MD & CEO, L&T Shipbuilding, vice admiral B. Kannan (retd).