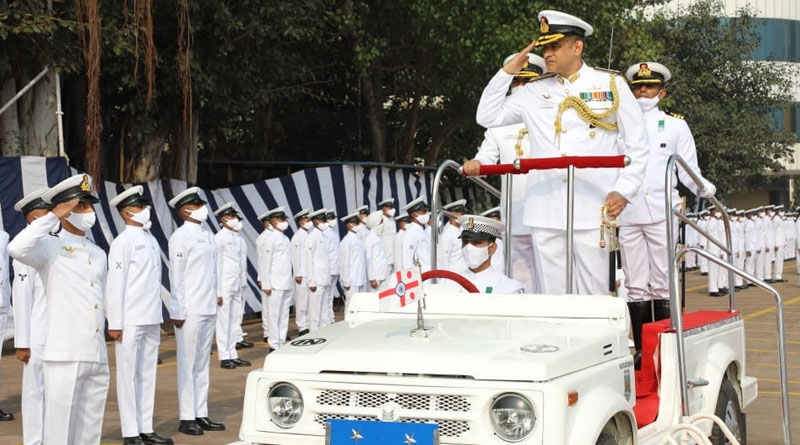 Rear Admiral Sanjay Bhalla took over the Command of the Eastern Fleet from Rear Admiral Tarun Sobti, VSM on 20 December. The change of guard took place at a ceremony held at Naval Dockyard, Visakhapatnam.

Rear Admiral Sanjay Bhalla was commissioned into the Indian Navy on 1 Jan 1989 and is a specialist in Communication and Electronic Warfare. The Flag Officer is an alumnus of the Defence Services Staff College, Wellington; College of Naval Warfare, Mumbai and Royal College of Defence Studies, London.

His staff and operational appointments include those as Training Commander at the Indian Naval Academy, Director at Maritime Doctrine and Concepts Centre and Naval Assistant to the Chief of Naval Staff. He also served as the Naval Adviser at the High Commission of India, Islamabad. Prior to assuming command of the Eastern Fleet, the Flag Officer was Assistant Chief of Personnel (Human Resource Development) at Integrated Headquarters (Navy), New Delhi.

A press statement from the Navy said, “Over the past 10 months, the Eastern Fleet under the command of Rear Admiral Tarun Sobti has maintained a high level of combat readiness and undertaken various operational missions including Operation Samudra Setu II towards the transfer of medical oxygen, Mission Sagar for providing humanitarian assistance to friendly foreign countries and multilateral maritime exercise Malabar-21 in Western Pacific off Guam. Rear Admiral Sobti would be taking over as the Director General, Project Seabird at Integrated Headquarters (Navy), New Delhi shortly on promotion to the rank of Vice Admiral.”