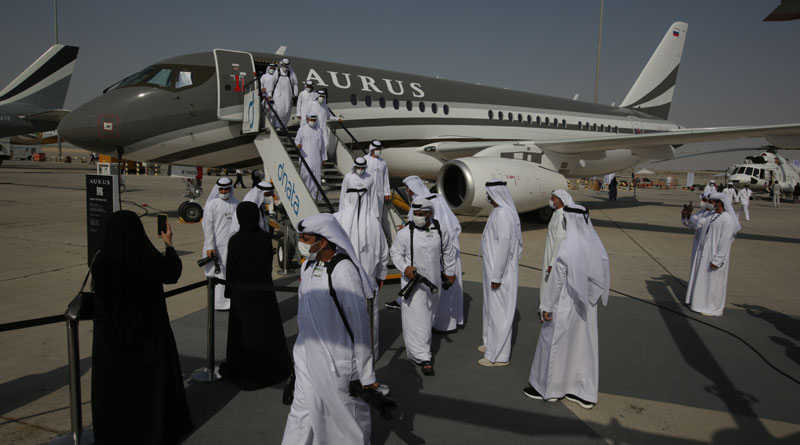 The United Aircraft Corporation successfully presented the MC-21-310 medium-range passenger aircraft, a new version of the business airliner based on the Superjet 100 under the Aurus brand and the Checkmate light tactical aircraft at the Dubai Airshow (United Arab Emirates). All three aircraft were presented abroad for the first time.

MC-21-310 with Russian PD-14 engines participated in the flight programme of the air show. A press statement from Rostec stated, “Delegations of the Gulf countries’ airlines and specialists from different countries came up aboard the aircraft while it was parked on the static display. Enlarged windows in comparison with those in analogous aircraft, roomy overhead bins and an aisle between the seats increased due to the widest fuselage in the class, allowing passengers to walk past a trolley cart – all this was demonstrated for visitors.”

The Crown Prince of the Emirate of Dubai Sheikh Hamdan bin Mohammed Al Maktoum and many other guests visited the modernised business jet based on the Superjet 100, which was first presented in Dubai under the Aurus brand, alongside the Aurus Ansat helicopter and the Aurus limousine Senate. Therefore, the aircraft joined the line of Russian high-tech luxury products promoted under this brand.

The highlight of the Dubai Air Show was the presentation of the Russian light tactical aircraft Checkmate. The prototype of the new aircraft was examined by the Emir of Dubai, Vice President and Prime Minister of the United Arab Emirates and the Minister of Defence of the United Arab Emirates Sheikh Mohammed bin Rashid Al Maktoum, Crown Prince of Abu Dhabi and Deputy Supreme Commander of the UAE Armed Forces Sheikh.

Commander-in-Chief of the Air Force and Air Defense of the United Arab Emirates, Muhammad bin Zayed bin Sultan Al Nahyan and members of the country’s government, officials, representatives of large industrial companies and delegations from dozens of countries. A special pavilion built up for Checkmate provided a spectacular multimedia presentation about the new aircraft.

The UAC delegation had an intensive business programme—meetings and negotiations were held with current and potential partners, representatives of countries interested in cooperation and their defense departments, heads of large companies from around the world. Opportunities for developing cooperation in the production of modern composite materials were discussed with large UAE corporations.

UAC General Director, Yury Slyusar participated in the 10th meeting of the Russian-Emirates Intergovernmental Commission on Trade, Economic and Technical Cooperation. The Russian delegation at the meeting was headed by the Minister of Industry and Trade of the Russian Federation Denis Manturov.

Dubai Airshow, one of the world’s largest air shows ended on November 18.