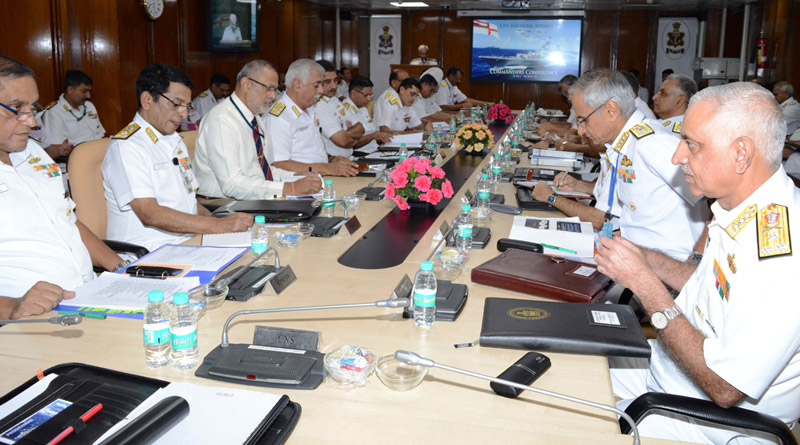 The emerging challenges facing Indian Navy are set to be discussed at the second edition of Navy Commanders’ Conference of 2018 that began on Wednesday. The discussions will focus on the themes of ‘Optimisation’ and ‘Emerging Technologies’.

The biannual conference is the second this year, the first having taken place from May 8 to 11.

The smallest of the three wings of the Indian armed forces, Indian Navy has witnessed an unprecedented growth in its operational tasking over the past decade in keeping with India’s rising maritime interests. The Navy has adopted the ‘Mission-based Deployment’ philosophy and the ‘Maintenance-to-Operations’ transition cycle over the past year to address the need to be present and to respond to emerging situations in the IOR.


The Naval Commanders led by the Chief of Naval Staff Admiral Sunil Lanba will among other issues, discuss combat readiness of units and optimisation of resources including manpower needed to meet the growing list of missions and tasks that the Navy is expected to perform.

Among the issues likely to be discussed include the needs of the Navy to meet its emerging strategic role, which in the coming days might range from Gulf of Oman to the South China Sea.

Over three days, the conference will have dedicated ‘Brain-storming’ sessions to discuss and conceptualise new ideas and concepts, as well as critically examine organisational structures and processes to meet developing challenges and threats to maritime security. The Commanders will also look at utilising emerging technologies such as Big-Data Analytics and Artificial Intelligence (AI) to improve the overall efficiency and effectiveness.

The conference will see Defence Minister Nirmala Sitharaman outline the maritime vision of the Government and expectations of the nation and its citizens from the Navy. The conference will conclude on Friday after three days of intense and focussed deliberations.