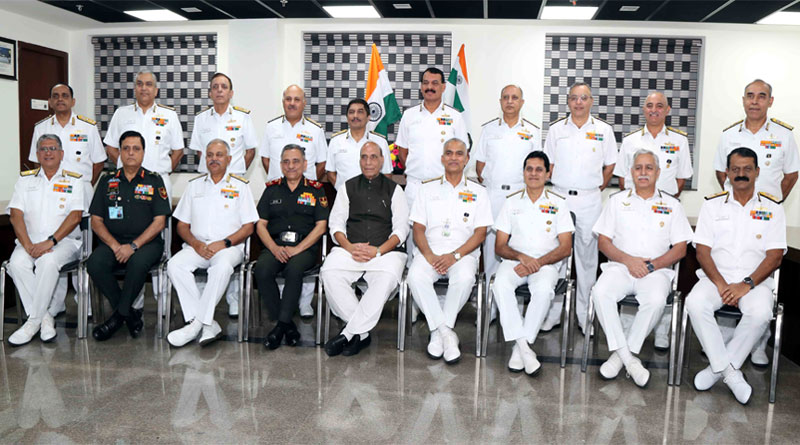 The biannual Naval Commanders’ Conference concluded on November 3. The Defence Minister interacted with the senior leadership of the Indian Navy during the Naval Commanders’ Conference on November 2. He witnessed a Tech Demonstration along the sidelines of the conference. He appreciated the Navy for the efforts invested towards indigenisation and innovation in the recent years, while urging the Naval Commanders to maintain focus on futuristic capability development for effectively overcoming emerging challenges in the maritime domain.

The defence minister also commended the Navy for maintaining a high Operational tempo towards ensuring secure seas for national security and prosperity. He congratulated the Navy for successful commissioning of INS Vikrant, India’s first indigenously designed and constructed aircraft carrier and adoption of a new naval ensign.

In consonance with the views of the Chief of Defence Staff, in his maiden address to the Naval Commanders since assuming charge, reiterated the need for operational preparedness, Aatmanirbharta and the need for further integration in the armed forces towards collectively meeting India’s national security imperatives.

The Chief of Army Staff, the Chief of Air Force Staff and the Chief of Integrated Defence Staff to the Chairman, Chiefs of Staff Committee (CISC) also interacted with the Naval Commanders and discussed avenues of further augmenting tri-services’ synergy and readiness, considering the prevailing security environment.