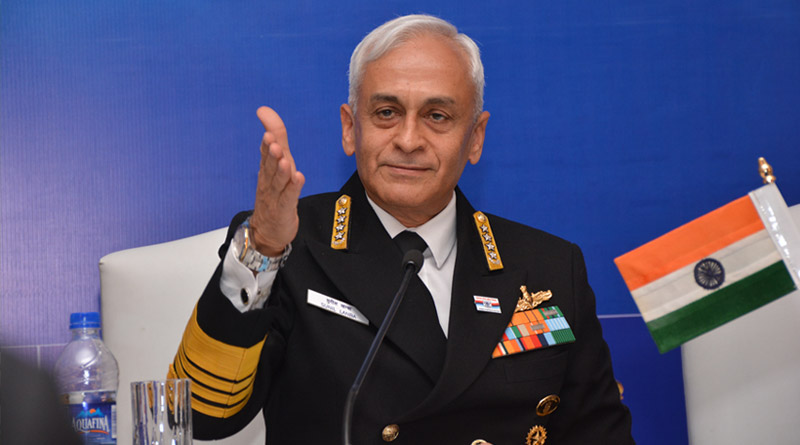 Chief of Naval Staff, Admiral Sunil Lanba, while addressing the annual press conference, said that by 2050, the navy will have 200 ships, 500 aircraft

Addressing the annual press conference before Navy Day, on December 3, Chief of Naval Staff Admiral Sunil Lanba said that India has “overwhelming superiority over Pakistan at sea”. While the balance of power against China in the Indian Ocean is also in India’s favour, considering the forces China can bring upon in the area. He said that as far as the Navy is concerned, there are no two fronts — “Indian Ocean is the only front.”

Explaining the Chinese naval expansion in the region, he said that China will continue to have the balance of power in its favour as far as the South China Sea is concerned. Detailing the Chinese naval deployments in the IOR, the CNS said “6-8 PLA Navy ships are usually deployed at any given time in the Indian Ocean Region.” He clarified further that while some of these are survey vessels, most of the deployed ships are on anti-piracy missions in the Gulf of Aden. He also revealed that a conventional Chinese submarine was deployed in the IOR for a month before returning.

CNS also said that the naval headquarters are already working on a third aircraft carrier, IAC-2, which will ensure that two aircraft carriers are available to the Navy at any given time. Detailing the same he said “the case for the second Indigenous Aircraft Carrier has received the necessary impetus. Though it is atleast a decade away, the Aircraft Carrier project would accrue signcant national gains in terms of boosting indigenisation and the country’s economy, through its life cycle of construction, maintenance and upgradation.”

CNS also mentioned that the three services are taking steps to improve ‘jointmanship’ and have agreed on the appointment of a Permanent Chairman of the Chiefs of Staff Committee. Adm. Lanba, who is the current Chairman, CoSC, said there were no differences among the service chiefs, and that the three of them generally agreed on “all issues among ourselves including overruling our individual headquarters to take jointman issues, forward”.